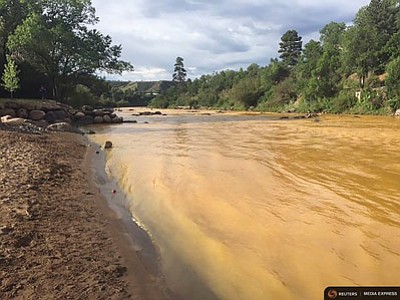 On Aug. 5, an EPA supervised crew at Gold King Mine in Colorado released 3 million gallons of wastewater into Cement Creek, which feeds the Animas River and San Juan River. Submitted photo

On Aug. 26, U.S. Senator John Barrasso (R-WY), Chairman of the Senate Committee on Indian Affairs (SCIA), announced that the committee would hold an oversight hearing to demand answers from the Environmental Protection Agency (EPA) regarding the impact of the Gold King Mine disaster on Indian country.

"The EPA must be held accountable for the release of contaminated and toxic waste water into the Animas River in Colorado and the San Juan River in New Mexico, Arizona, and Utah," Barrasso said. "Tribes use the waters from these rivers and this hearing will be a good chance to hear firsthand how this disaster is impacting them. The EPA needs to work with these tribes to ensure the mess is cleaned up, the sovereignty of the tribes is respected, and that the concerns of the tribes are acted on."

Tester said that water is the most valuable resource and everything must be done to protect it for future generations.

"I hope this hearing will help bring about solutions so we can clean up the land and water for Navajo Nation and all the folks impacted by this disaster," he said.

McCain thanked Barrasso and Tester for agreeing to hold the oversight hearing on the impact of the spill on the Navajo Nation.

"I share serious concerns expressed by members of the Navajo Nation about the EPA's response to this spill, and about the potential for toxic substances to flow onto the reservation's lands and waters," he said. "Through this hearing, Congress will make sure that the EPA explains the public health, environmental, and economic costs of the spill, and its remediation plans, as well as addresses other problematic EPA activities involving the Navajo Nation."

Udall said that the committee chairman and vice chairman's responsiveness is important to the Navajo Nation.

"Through my continued discussions with Navajo Nation leaders, I understand their dissatisfaction over EPA's response, and I share their concerns about the uncertainty of long-term contamination of land and water by the toxic mine drainage that was released," he said. "Congress has a responsibility to oversee the federal government's response to this crisis, and the upcoming committee hearing will help ensure that EPA addresses the public health, environmental and economic costs of the spill.

On Aug. 5, an EPA-supervised crew, at the Gold King Mine in Colorado, released three million gallons of wastewater into Cement Creek, which flows into the Animas River in Colorado and then to the San Juan River in New Mexico, Arizona, and Utah. The San Juan River crosses the reservations of both the Navajo Nation and Southern Ute Indian Tribe. The contaminated water contained heavy metals such as lead and arsenic.