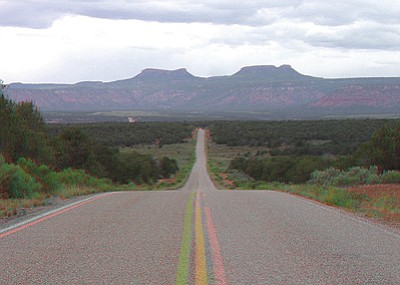 The Bears Ears Inter-Tribal Coalition, chaired by Navajo and Hopi representatives, said the president needs to create the Bears Ears National Monument to protect ancestral land on the Colorado Plateau.

The same argument has been raised by members of the San Carlos Apache tribe in their fight to block a copper mine at Oak Flat in southern Arizona, on land that opponents say is sacred to that tribe.

"The San Carlos Apache people, our brothers and sisters to the south, they relate to Oak Flat in a very familial way," said Eric Descheenie, co-chairman of the Bears Ears coalition.

Coalition members said they fear a similar fate for the land around the two Bears Ears buttes in Utah's San Juan County, where gas and oil companies are pushing for new drilling rights.

Designating the area a national monument would protect it from those companies, and from the ongoing threats of "looting, desecration of sites, grave robbing, excessive off-road vehicle usage, mineral leasing and uranium mining," said Descheenie, who is also a special adviser to the president of the Navajo Nation.

"It's imperative that the integrity of that land remain," Descheenie said. "You can't talk about who we are as people without talking about the land."

But some lawmakers from Utah said that while they welcome the input and recommendations of the coalition, many Native Americans in the state oppose the proposed national monument designation.

"Our offices have now received over 65 detailed proposals from various stakeholder groups regarding land management in eastern Utah. We remain committed to reviewing each proposal" before producing legislation, said Sens. Orrin Hatch and Mike Lee and Reps. Rob Bishop and Jason Chaffetz, all Utah Republicans, in a joint statement.

The coalition's proposal calls for a national monument designation that would honor all existing mineral rights, but prohibit any future mining in the Bears Ears area. The tribes also propose that responsible off-road vehicle use be allowed in Bears Ears National Monument.

The proposal marks the first time tribes have come together to directly petition a president to create a national monument, which coalition members called "a big breakthrough for Native Americans."

"We're creating a new path, and that path has really never been followed before," said Alfred Lomahquahu, a vice chairman of the Hopi Tribe who is also co-chairman of the coalition.

Lomahquahu said Oak Flat "would have gone a lot differently" had tribes already known how to use their sovereignty as a tool to petition the government.

Congress in December approved a swap of thousands of acres of copper-rich federal land in southeast Arizona for thousands of acres held by Resolution Copper that the company said was environmentally sensitive. The deal failed in several successive Congresses, but finally passed last year when Sen. John McCain, R-Arizona, tacked it on as an amendment to the must-pass National Defense Authorization Act.

Supporters of the deal say it will protect environmentally sensitive land while creating thousands of jobs and pumping billions of dollars into the state economy.

But critics say the deal would trample on environmental protections while destroying a site that is sacred to the San Carlos Apache. Rep. Raul Grijalva, D-Tucson, introduced the Save Oak Flat Act in June in an effort to reverse the ruling, but the bill remains stalled in the House.

Lomahquahu said tribes have the power to protect their sacred land if they band together.

"With the co-management of Native tribes, things like Oak Flat wouldn't have happened," he said. "Unfortunately, the Native tribes were not in consultation before that."

He called the Bears Ears proposal a step forward for Native tribes, even if he believes "we need to learn how to use our sovereignty effectively."