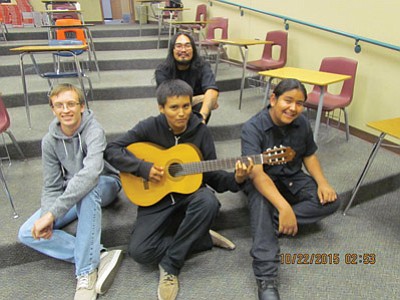 The program helps build life skills with young reservation area students interested in creating and playing music with a classical foundation under the skillful guidance of a professional Native composer.

The Grand Canyon Music Festival began in 1984 and brings national and internationally known classical musicians to the Grand Canyon for four weeks in the fall. The groups present established and new music works to audiences visiting or living near Grand Canyon at the Shrine of the Ages in the park. The performances at the Canyon are usually sold out for every single season and continue to flourish since the original performances 31 years ago.

In 2001 the Grand Canyon Music Festival started the NACAP program that would present professional quartet live performances at Arizona reservation schools immediately after the four week run at the Canyon. The program's goal is to encourage and invite interested Hopi and Navajo students to participate in a crash course in music composition and performance working directly with a professional music composer mentor who was also Native.

In the fourteen years that NACAP has been running, NACAP has received several prestigious awards, including the 2011 President's Committee National Arts and Humanities Youth Program Award, which First Lady Michelle Obama presented at the White House to NACAP. The program has also earned NewMusic's USA Education Award and the Arizona Governor's Art Award for outstanding music education programs.

The list of past and current Native music composers who have been the artist-mentor in residence for the NACAP program reads like a who's who in the Native American music field and includes Raven Chacon (Navajo) from 2004 to present, Michael Begay (Navajo) 2009 to present, Trevor Reed (Hopi) 2010 to present, Adam Overton 2006, Jerod Tate (Chicasaw) 2004-05, David Mallamud 2003, Blair Quamahongnewa (Hopi) 2008 to present and Brent Michael Davids (Mohican) 2001-02.

With only 12 student high school programs across the country recognized every year by the Office of the President, NACAP was recognized "for its effectiveness in developing learning and life skills in young minority people by engaging them in a rigorous program in music composition, where students study with professional composers, traversing the entire compositional journey, from inspiration, to motivation, performance and recording their own original student works."

"NACAP gave me discipline not just in writing music but in life overall," Begay said. "It opened my eyes and mind to understanding how powerful the creative arts are, so much so, that I'm working on completely my own undergraduate degree in music."

NACAP students at Tuba City High, Peyton Nez, sophomore, Xavier Ben, freshman and Shane Moran, a senior, participated in an intense two-week course during their regular school day working on original compositions with mentor Begay and also got a chance to hear their own creations played at the Shrine of the Ages in September by a professional quartet.

"I titled my piece "Travel to Darkness" because it had to do with my Dad telling me and my siblings a Navajo story about kids in the dark," Nez said. "My music piece was created not only just about the story itself, but also about my memories of being with my dad, sitting close in the winter with my family, and those good memories of a special sharing."

Nez started playing guitar at age 11 with his brother.

Ben said his musical composition was inspired by his memories of being in his grandmother's garden in nearby Moenave, which is about eight miles from Tuba City. Ben is a first year NACAP student and plays piano, guitar, violin and Native flute.

Moran participated for a third year in the NACAP program and started playing trumpet in grade school and now plays guitar, bass and trombone. Moran hopes to study music as a serious career after he graduates from Tuba City High in 2016. Moran titled his final 2015 musical piece "Art of Procrastination." Moran's parents were in the audience when his composition was presented at the Shrine of the Ages giving full support and encouragement for his work.