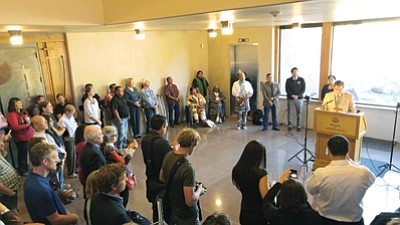 Navajo Nation President Russell Begaye speaks in front of a group of tribal leaders from across Arizona during an Oct. 12 press conference at the Museum of Northern Arizona to announce tribal support for the Greater Grand Canyon Heritage National Monument Act. Kevin Moriarty/NHO

Representatives from Arizona tribes came together Oct. 12 along with Grijalva to introduce the Greater Grand Canyon Heritage National Monument Act, reflecting the long history and deep cultural roots of Native American tribes in the region.

Grijalva sought input from the Havasupai, Hualapai, Hopi, Navajo, Zuni, Paiute, and Yavapai leaders and the Act emphasizes the importance of protecting tribes' historical homeland, water sources and sacred places contained within it.

"The bill provides specific language - and serves as a platform - for a presidential proclamation under the Antiquities Act to preserve the Grand Canyon's rich heritage of 'biological, cultural, recreational, geological, educational and scientific values,'" according to analysis from Grand Canyon Trust.

"Sometimes when proclamations are made under the Antiquities Act regarding something as large as the Grand Canyon, tribes are put in the backseat," Grijalva said. "This bill promotes a collaborative relationship and brings the Antiquities Act back to front and center with Native tribes."

"As far as the Antiquities Act, which was originally enacted to preserve our cultural resources, this is the first time that the tribes have been involved in really having a say in those cultural resources and a say in how we could also [have a say] in co-management and lift the burden of some of the management aspects from the federal government," he said.

Lomahquahu said he hopes this is the first step in protecting areas around the Little Colorado River and in other states where Native people confront the same issues.

"If we as tribes can get together, we can also use this template for another national monument in another area," he said. "Even though we might not be culturally affiliated with somebody... we could still use this as a way to support them and make sure that each tribe across the nation is beginning to use the tool of self-determination and sovereignty to benefit the tribes."

Navajo Nation Vice President Jonathan Nez said in addition to tribes coming together and taking a stand to co-manage the Grand Canyon Heritage National Monument area, the bill does other important things too.

"For Navajo it reaffirms a few things," he said. "It reaffirms our uranium ban, our Navajo Nation law, waste transportation throughout Navajo. The other thing is, we have always been on record as saying, we reaffirm the opposition to the Escalade project. It is all interrelated to the Grand Canyon region. For Navajo, I think that's the reaffirmation of many of the things this administration has been working on. It reaffirms us supporting one another."

The Act would make permanent the 20-year ban on new mining claims that the secretary of the Interior ordered in 2012 to protect the Grand Canyon's unique ecological, cultural and recreational values. Grijalva has led efforts to protect the Grand Canyon from new uranium mining claims for years and was instrumental in then-Interior Secretary Ken Salazar's 20-year withdrawal announcement in 2012.

The bill does not affect existing and historical uses, including water rights. It would not change rules on hunting, grazing, logging, recreation, private and state inholdings, leases or commercial uses. And it would not close mines or claims with valid existing rights, like Canyon Mine, about five miles from the Grand Canyon, which was approved to reopen earlier this year.

Nez said that many of the uranium mines were opened during the Cold War era and the federal government used the uranium to build bombs, among other things. But the companies were not held responsible to clean the mines up.

"Uranium mines have been a devastation to our people," Nez said. "Right now we have uranium contamination of our drinking water in many of our communities throughout Navajo. We have open uranium mines... that have yet to be cleaned up."

It directs the interior and agricultural secretaries to establish an advisory council "to oversee and collaborate on the management of tribal sites, artifacts, ancient trails, burial sites and resources." The council would include two representatives from each of the 11 associated tribes to the Grand Canyon along with other government representatives.

Nez said President Barrack Obama could easily designate the area as a monument with a stroke of the pen under the Antiquities Act. There is also some movement to return some federal lands back to the states.

"But utilizing the legislative process with Congressman Grijalva, I think there's going to be a larger discussion throughout the United States about how Indian nations can have a seat at the table to co-manage other federal lands. If was up to the Nation, if it was up to tribes then [the federal lands] should return first to the indigenous people... before they go to the states," Nez said.