How should Navajo Nation fix the Bennett Freeze?
Some people living in former Bennett Freeze area want power lines to their homes, others need better roads and a solid roof over their heads - president and vice president tour Western Agency looking 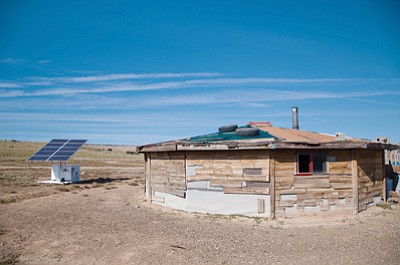 GRAY MOUNTAIN, Ariz. -Mary Begay's home is 25 miles west of Gray Mountain Trading Post down a dirt road with rocks sharp enough to cut tires and which winds through rangeland passing underneath power lines. The lines bypass the Navajo Nation and Hopi Reservation sending power to areas off the Navajo Nation.

There, a handful of Bennett Freeze area residents met with division directors and Navajo Nation Vice President Jonathan Nez to air their concerns and needs to the administration (Navajo Nation President Russell Begaye was absent). Yet, Begay's place is only one of many in the western Navajo Nation that have needs, some of which are easier to get to than Begay's home.

The Oct. 15 meeting was part of a two-day tour by Nez and Begaye of the western Navajo Nation in the Bennett Freeze area - this time division directors were also on hand also to see the area firsthand.

The visit is a positive step, said Don Yellowman, head of Forgotten People, a grassroots organization advocating for the basic needs of Bennett Freeze area residents.

"It's a start," he said. "There's some things that maybe could have been done differently or better but it's long overdue. It's what people... have been waiting for. Let's quit complaining and go with what we've got."

Saying the time for talk is over and action is needed now in the Bennett Freeze area, Navajo Nation President Russell Begaye said in a press release prior to the tour that over the years there have been numerous studies done on the Bennett Freeze area. He said that departments and programs have talked about putting infrastructure in place, putting housing up for residence or providing electricity and water.

"However, nothing has really taken place," Begaye said in a press release. "Up until this point, it's all been talk and no action. Too many promises have been made over the last 49 years and I think our people are beginning not to believe what they hear. We want to let our people know that we are going to do something that should have been done years ago."

In 1966, Robert Bennett, commissioner of the Bureau of Indian Affairs, ordered development to stop on approximately 1.5 million acres of land that was in dispute by the Navajo Nation and Hopi Tribe. During the freeze, no development or improvement to any homes in the area was allowed.

"Our people's homes and corrals have needed upgrades but the freeze prohibited it," Nez said. "For 40 years, our people had to secretly make repairs to their homes. There were no improvements for electricity, plumbing or clean drinking water. Our people have been forced to live in 1966 for 40 years."

Saying that the administration wanted to address the concerns of the area residents in a tangible way was a reason for the tour that took place Oct. 15 -16. Begaye said that families need to be involved and the community needs to be involved.

"We need to build families and re-institute the old way of life where we support one another," he said. "It's nothing new, it's a Native concept. We need to return to that way of life."

At the meeting, Milton Tso, Cameron Chapter president, said many of the people in Cameron do not have electricity or running water, even while street lights have gone up blocks away from residents homes on Highway 89 leading to the intersection with Highway 64, one route that exits the Grand Canyon. He said he sees lights near Window Rock at night in some areas that are remote and wonders why it is so hard to bring electricity to the western Navajo Nation.

Nez said what he and the president and their administration are trying to do is give tools to the people - tools they had before in building communities and helping each other, using the skills of the people to help their people, which is the key to sovereignty and self-determination.

"We're not wanting to give them everything, build them everything. At the end of the day give them the keys and say, 'here's a free house for you,'" he said. "That's the whole cycle of colonialism. How do we break through that? We have to empower our people."

Yet, not everyone in the former Bennett Freeze area is asking for a new home or even an electrical line and most are not looking for a hand out. Some, like Mary Begay, want something different like a culvert to put under a washed out road or a little gravel on the road so water can be diverted or a roof that will not blow away in the wind.

Yellowman said underneath the simple requests lies the reality of the Bennett Freeze - a structural violence that denied people so much of what the outside world enjoys. He also believes the Bennett Freeze was forced on both the Navajo and the Hopi because of energy extraction - energy that was ultimately delivered elsewhere, off the Nation and the Hopi Reservation with residents caught in the crossfire and two tribes pitted against each other. They each paid the price - one price was the inability to fix their homes.

Yellowman gestured to the hogan on Begay's land.

"I can see the hogan here just needs some roofing. If they came and bought several rolls and got a chapter employee to fix the roof, they'd be tickled to death, just to have that. It's the bare minimal that the people would be content with," he said. "They're not asking for a Cadillac, they're asking for a good, used pickup that will haul wood and haul water, even if it's 20 years old."

On the 1.5 million acres of land that encompass the former Bennett Freeze, progress means different things to different people. For Tso, progress is Cameron using its proximity to the Grand Canyon for its own benefit in creating jobs that ultimately have people spending money that stays in Cameron, which would help the community as a whole.

Tso said he wants to know in 20 years if Bennett Freeze residents' children will be standing before leaders in Window Rock thanking them for the progress or will they still be asking for progress, as they have been for the last 40 years.

For Yellowman, whose voting chapter is Bodaway-Gap, progress is people returning to their way of life, a self-sustaining way of life as farmers and sheepherders, with a solar program as an option among other off-grid sustaining ideas.

He sees a policy like the Bennett Freeze as a genocidal policy, one that restricted people in repairing, building or expanding their homes and succeeding in driving off generations of younger people. Those young people would have been farmers or sheepherders on the land taking care of their elders, supporting them and moving them forward. Instead, Yellowman said, the elders are left hauling their own water and dealing with the consequence of structural violence, the end result of which is death, with no one around to witness it.

"So I see progress could be improving that road, so that they can haul water with their pickups so their trucks can last longer," Yellowman said. "Maybe that earth-dam over there that is full of sediment, where's the machinery that could have cleaned that out and captured most of the water run-off?"

Still, Yellowman is hopeful that the rehabilitation of the Bennett Freeze area is starting, despite issues that some of the people involved have had in the past.

"We're going to have our differences," he said. "But we have to compromise and come to some terms and strive toward a working relationship. This is the beginning of that. At least we're talking."