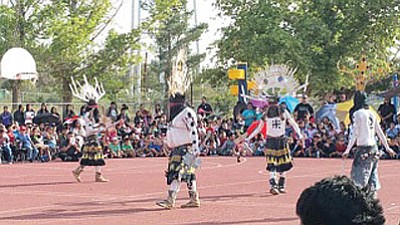 TUBA CITY, Ariz. - The first week of October was a time of heightened awareness, appreciation, celebration and sharing of American Indian tribal culture and language at the Tuba City District's public schools.

Students in each school were able to learn something new and something old about their cultures, heritage and tribal languages.

Explaining and encouraging students to learn the history behind the tribal art, tribal performance or daily tribal household skills made a lasting impression for all the students during the week of tribal heritage observation and practice.

Some of the TCUSD students come from traditional homes that practice tribal art or home life skills everyday and they are familiar with the tools and art skill language and terms. Other students who live in more contemporary, urban Native settings are just beginning to learn and understand the art forms and had lots of questions for the mentors who were in their classrooms during the week.

Tohannie was born and raised on the White Mountain Apache reservation in Whiteriver, which is located in north central Arizona.

Tohannie started performing at age six, singing both Apache and Navajo traditional songs with his grandfather Stacey Classey, who was a medicine man. Tohannie's father, Joe Tohannie, Sr., is a member of the Navajo Nation and also was a prominent figure in teaching Joe Jr. how to sing traditional Navajo social songs that complimented his repertoire of Apache social dance songs.

Tohannie and his team of White Mountain Apache Crown Dancers were well received by the students and staff members at Warrior Pavilion and at a free public presentation that evening for the Tuba City and Moencopi community.

Tohannie took the time to recognize the Tuba City High ROTC students during the daytime presentation and he described the members as "future American Indian Warriors" who will serve and protect their country and original tribal United States homeland.

Tohannie is from the Tenadolzhage clan of the Eagle clan from White Mountain and his Navajo clan lineage is Tachinii.

Tohannie was nominated for a Grammy in 2014 for his CD "Apache Blessing" and continues to produce CDs with both Apache and Navajo traditional social music.