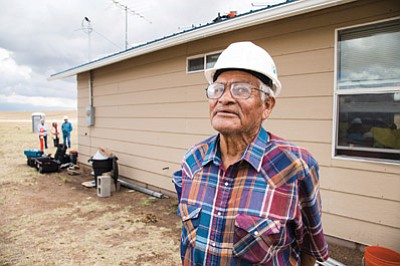 Henry Yazzie stands in front of his home about 10 miles outside of Leupp, Arizona and located in the former Bennett Freeze area. GRID Alternatives, a nonprofit organization, installed an off-grid solar system on Yazzie’s roof. Ryan Williams/NHO

LEUPP, Ariz. - How long does someone who lives in the Bennet Freeze area, which stretches across 1.5 million acres on the western side of the Navajo Nation, have to wait for electricity? For Henry Yazzie it was about 40 years.

Last week, Yazzie, a Vietnam veteran, was overcome with emotion as volunteers installed a no-cost off-grid solar system with help from GRID Alternatives, a nonprofit solar installer that provides clean energy technology and job training to low-income families and underserved communities. The system will power his lights, his TV, VCR, radio and even a refrigerator, if he chooses to get one.

"I appreciate it," Yazzie said, gesturing to all the people at his home. "I'm glad I served my country."

Yazzie said he has lived in the area all his life on the reservation. He has hauled water and lived without electricity the whole time.

Gilbert Chee, who is the commander for the Western Navajo Agency and Vice Commander for the Nation. He also translated for Yazzie and said the electicity was a long time coming and that he was glad that people were there to show they cared.

"It's about time," Chee said. "It's been over 40 years he has lived like that. Actually we all live like that. He said he was so overwhelmed this morning. It is emotional for him. This is the most emotion I have seen him show."

Yazzie's home was among the 15,000 across the Navajo Nation without access to electricity, many of which are in the Bennett Freeze area, which has not seen any development or upgrade of homes in 49 years.

In 1966, Robert Bennett, commissioner of the Bureau of Indian Affairs, ordered development to stop on approximately 1.5 million acres of land that was in dispute by the Navajo Nation and Hopi Tribe. During the freeze, no development or improvements to any homes in the area was allowed.

Vice President Jonathan Yazzie said Sept. 24 in a meeting of Bennett Freeze residents that the cost of getting electrical lines out to people who live in an isolated area like Yazzie is cost prohibitive but that solar may be an option that people can explore.

Tim Willink, director of tribal programs for GRID Alternatives, said solar is a great option for rural areas with little or no access to electricity.

"The amount of solar resource that is available and also the lack of electricity energy access out here, solar is a very good fit, particularly the off-grid systems if it is done correctly," he said.

Yazzie lives in an isolated area off Indian Route 15 and down a dirt road that winds through open land. The cost of his solar install, paid for by Wells Fargo, was between $15,000 to $20,000 with labor and materials included. The batteries chosen by GRID Alternatives to install in Yazzie's home are maintenance free, unlike some systems that have lead acid batteries that do require some maintenance.

GRID Alternatives emphasizes job training for local people, some of whom were on the roof at Yazzie's home learning how to install the solar panels. Willink said that over a number of years and through some classroom work as well, local people will be educated on the technology and end up maintaining the systems themselves in the years to come.

"As a nonprofit our mission is to number one bring access to this technology and these types of systems out to tribal communities," he said. "But also we want to train people and build local capacity here."

One of the volunteers, Taracita Martinez, who is currently serving in the Army National Guard, said she really appreciates the work that GRID Alternatives is doing, especially the job training, which can provide a more complete job experience than just classroom work.

"It's important so they can get the experience, get that known experience, when they are actually out there looking for a job, they don't just have a certificate but they actually have the work with people around them and the area and tools you need," Martinez said. "People will come in and say, this person was on top of the roof, dealing with electrical work and the hardware tools that we work with. They get that bigger picture that you have been out there using your knowledge."

She was happy to come out and help install Yazzie's solar panels and Yazzie made an impression on her.

"I feel really good, especially knowing he was a Vietnam vet," Martinez said. "The stories he presented this morning. I was very honored to hear those stories. I haven't heard anything like it before, with the prayers and stuff. It was a bad, bad year, that year of the Vietnam war. Anything to give back to those veterans."

Partnering with the Navajo Nation

Jonathan Yazzie runs Tolani Lake Enterprises, a nonprofit, which is working on educating homeowners who already have solar systems about how to maintain their systems, something he says some of the homeowners were not told how to do when the systems were installed. He said solar is important for those communities.

"A lot of our elders live in remote areas where power lines don't go," he said. "We want to push solar through the Nation."

Maintenance for some of those systems include replacing and cleaning battery cables, cleaning solar panels and making sure the power used in the house is at a level for the system.

Yazzie said that he has tried to talk to the Navajo Nation about creating a program to upgrade and install solar in the Bennett Freeze area but so far he has had no luck.

"I've been writing letters to our tribe and our council delegates and our local leaders," he said. "It's not cheap but six years I have been trying to push that through. I'm hoping with our leader now. They say they'll do that. Our last leader said they'd do it and invest but it never happened."

Willink said GRID Alternatives is interested in partnering with the Navajo Nation in Window Rock to install off-grid solar panels on a larger scale, but they are starting out locally.

"We are starting out at the local level because we believe in local, community solutions and we look to...chapter coordinators to identify a lot of the families in the area who need it most," he said.

Leonard Chee, executive staff assistant for the Office of the President and Vice President, was at the site. He said it is a must for the president's office to look at and partner with businesses like Wells Fargo, GRID Alternatives and others to bring something to the people who do not have electricity, especially to veterans like Yazzie, who are a priority for the current administration.

"That's why I am very excited to be here today," Chee said. "To witness and to take it back and share the resource information."

Yazzie was identified by Valerie Kelly, chapter coordinator for Tolani Lake who lives in Leupp and also works with a veteran's group. She and Willinks conducted a field visit to look at the structure of some of the homes in the Bennett Freeze area and identified Yazzie's home as one that could hold the panels. The field study includes going into the attic and measuring the trusses, taking pictures and making sure the structure is sound. The study also incorporates local people to train them on conducting a site visit.

"What's fascinating about this project is it takes the local people, the volunteers today, they learn hands on how to build it and how to maintain and what to look for," Chee said. "The people who live here will be able to be contacted and they are trained."

Willinks said the local capacity can be built in a number of ways. GRID Alternatives will continue to look to Kelly for her guidance in identifying homeowners who already have systems that need to be refurbished. They will also provide guidance to homeowners on what to do on a cloudy day to let the batteries charge up and last its full life. There are training materials provided to the homeowners to give them that guidance.

Jonathan Yazzie said solar is the answer for people in the Bennett Freeze area.

"That's the answer for us," he said. "I live in Sand Springs, we still live on Hopi, and we have solar out there and it works."

More information about GRID Alternatives can be found at www.gridalternatives.org.