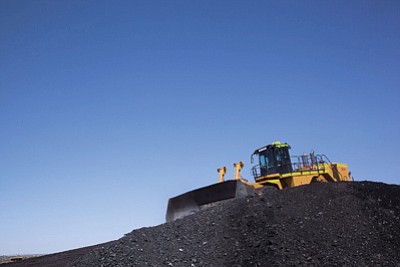 A bulldozer crawls over a pile of coal at Peabody’s Kayenta mine on the Navajo Nation in this 2012 photo. Photo/Peabody Energy

WASHINGTON - The House approved a bill Oct. 8 that aims to streamline the process of licensing energy projects on tribal lands, by shortening the time for federal approvals and limiting public comment on environmental impacts.

The Native American Energy Act would also allow the Navajo Nation to enter into renewable mineral leases for up to 25 years without first getting approval from the Interior Department - one of several provisions in the 16-page bill.

Critics said the measure, which passed on a 254-173 vote, is environmentally irresponsible and would gut protections of the National Environmental Policy Act.

But supporters like Rep. Paul Gosar, R-Prescott, called the bill an important step to empower Native Americans, who backers said had asked for the authority granted in the measure.

"Why do they have twice the burdensome regulations that private industries and states and local municipalities have?" Gosar asked of the process that tribes now must go through for energy projects. "We need to ... empower them to be solution models instead of cripples."

In addition to streamlining the permitting and leasing process, the bill would prohibit payment of attorney's fees in lawsuits challenging energy projects on tribal lands and it would exempt tribal lands from any regulations on hydraulic fracturing - or "fracking" - in oil and gas operations.

In floor debate Thursday, Rep. Raul Grijalva, D-Tucson, called the bill an attack on the National Environmental Policy Act that will "lead to less environmental protection on Indian lands and less judicial recourse to those affected."

The White House came out against the bill Oct. 7. A statement said the administration supports energy development on Native lands, but opposes this bill which "would not ensure diligent development of resources on Indian lands."

Gosar, who co-sponsored the bill, dismissed both the White House and Democrats' concerns over the bill's environmental impact, saying that tribes take care of the environment and those who think otherwise don't know the truth.

The bill passed with just 11 Democrats voting in favor, including Rep. Ann Kirkpatrick, D-Flagstaff, whose district includes that portion of the Navajo Nation in Arizona. All five Arizona Republicans voted for the bill, while Rep. Kyrsten Sinema, D-Phoenix, did not vote.

Kirkpatrick said she was standing with the tribes of Arizona in her support of the bill.

"It strengthens their tribal sovereignty and economic independence," she said in a prepared statement. "With more control over energy and natural resource development on their own land, tribes are better positioned to expand their economies and empower their people."

Calls seeking comment from the Navajo Nation were not immediately returned.

"In my home state of Arizona, there is a great potential for solar, wind and geothermal energy on Indian lands," Grijalva said. "We just need to fix the real issue that inhibits the investment to these projects," which he said the bill does not do.

But Gosar said the bill, which now goes to the Senate for consideration, is a step in leveling the playing field.

"We have to stop talking about empowering Native Americans and instead, empower them," Gosar said.