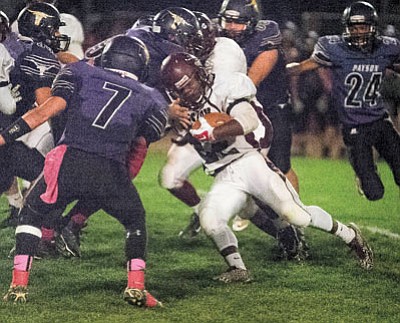 Winslow improved to 4-3 with the win while Payson fell to 5-2 with the loss. The win was huge for the Bulldogs and gave them legitimate hopes to qualify for the playoffs.

Rey Chavez-Velez at quarterback passed well for the Bulldogs. C. J. Chacon, Darrien Brown and Mikel Bonner at running back and Nate Hollins on defense and as a receiver all played well. The entire Bulldogs defense played well.

Payson drew first blood on a 26-yard field goal by Angel Jacquez for a 3-0 lead with nine minutes left in the first quarter.

The Bulldogs took the lead on a 24-yard run by Brown to cap an 82-yard drive. Damon Avelar booted the conversion to give Winslow a 7-3 lead.

The Bulldogs defense held Payson and had the ball in Payson territory when the first quarter ended. Brown had an apparent 26-yard touchdown run negated by a penalty on the first play of the second period.

Winslow continued its 46-yard drive and scored on a one yard run by Chacon. Avelar booted the conversion to give Winslow a 14-3 lead.

Payson drove 65 yards and scored on a 36-yard pass from Chaz Davis to Alex Suarez. The conversion by Angel Jacquez cut the Winslow lead to 14-10 with seven and a half minutes left in the half.

A pass interception by Hollins stopped a pass drive and gave the Bulldogs the ball deep in Payson territory.

Payson got the ball back on a pass interception by Shane Law with just over a minute left in the half. The half ended with Winslow leading 14-10.

Payson had a scoring threat early in the fourth quarter but the Winslow defense held and took the ball on downs near the Bulldog 20-yard line.

The Bulldogs drove 52 yards and scored on a one-yard run by Chacon.  Avelar booted the conversion to give Winslow a 21-10 lead. The quarter ended seconds later with the Bulldogs leading 21-10.

Hollins intercepted a Payson pass and returned it 46 yards for a touchdown on the first play of the fourth quarter. The conversion failed but the Bulldogs led 27-10.

Payson scored on a 36-yard pass from Davis to Rueben Estrada. The two-point conversion run failed and Winslow still led 27-16 with just 2:19 left in the game. The Bulldogs ran out the clock and walked away with the victory.

The Bulldogs play host to the Page Sand Devils on Friday. Page is 1-6 for the season and has lost six straight games including falling to undefeated Show Low 63-8 on Friday.

Winslow will meet the always formidable Blue Ridge Yellowjackets in Pinetop Oct. 23. Blue Ridge lost to undefeated Snowflake 36-7 in Snowflake for their second straight loss to fall to 5-2 for the season.

A win over Blue Ridge, who lost to Payson 20-19, would greatly improve Winslow's playoff hopes. The season finale against the Snowflake Lobos in Winslow may prove a very important game.

The Lobos have a date with the also undefeated Show Low Cougars Oct. 23 in Show Low.