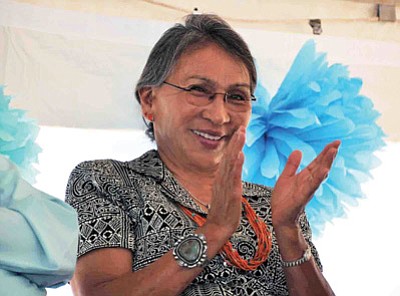 WINSLOW, Ariz. - The University of New Mexico College of Nursing announced in its September alumni community newsletter that it gave an Outstanding Alumni Award to Sally N. Pete, the chief executive officer with the Winslow Indian Health Care Center in Winslow, Arizona.

"Hard work certainly paid off, and I am honored to be recognized by the UNM College of Nursing during the 60th Anniversary," Pete said.

Since 2002, her position requires an oversight of three health care facilities at Winslow, Dilkon and Leupp. These facilities provide health services to a population of more than 16,000 within eight Navajo Nation Chapter service areas in the southwest region of the Navajo Nation.

After WIHCC transitioned successfully from Indian Health Service to P.L. 93-638 Self-Determination status in 2002, the center grew from 187 employees to more than 350, and the budget has increased from $17 million to more than $50 million today.

Other major achievements include the September 2014 opening of the new Medical Office Building (MOB) and the August opening this year of the state-of-the-art Hozhoogo Iina Wellness Center on the WIHCC campus.

Pete's other awards are numerous and include 2006 UNM College of Nursing's Distinguished Alumni Award and the Indian Health Service Chief Nurse Award.

The 2006 award noted, "Sally Pete's distinguished career in Navajo Area Indian Health Service, along with her exceptional commitment, her immense contributions and professionalism as a public health nurse and a health administrator, are deserving of our recognition."

Pete was also recognized as an outstanding CEO under P.L. 93-638 Self-Governance status and received an Area/Regional Impact Award from the National Indian Health Board, Washington, D.C.

In the late 1980s, she provided technical assistance to all of the Public Health Nursing programs within the Navajo Nation.

She focused her priority concern on patient quality care from infancy to the elderly. In all these positions, Pete also gave particular attention to children at high risk and school health programs that encompass a number of significant health screenings and critical immunizations.