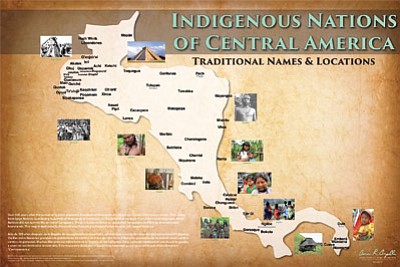 With new maps, Central America, which is completed, and South America, which is almost done, Carapella has almost mapped the entire western hemisphere, giving people a glimpse of a time before Columbus-a time when over 3,000 Native tribes lived on the land. Eventually, when he finishes mapping Caribbean tribes, he will piece together an immense map of the western hemisphere.

His original goal as a teenager, when he first started thinking about the maps, was not just to create these types of maps but to educate people. The feedback from people who interact with his maps is encouraging.

The goal has also changed a little since he became a father. He thinks about how his son's generation is going to grow up and what knowledge they will have or retain about their own history.

"There's all this new awareness and pride in restoring tribal names that are correct but there's so much cultural loss that is happening right now at the same time," Carapella said. "We're kind of in a weird generation."

A recent visit to the Punca tribe a few hours away from his home in Oklahoma brought the cultural problem of language loss home. The tribe is from Nebraska originally but about half of the tribe was sent on a Trail of Tears to Oklahoma resulting in two tribes. The Nebraska tribe has no more Native speakers of their language and there are only five Native speakers of their language in Oklahoma. The language director of the tribe arranged a meeting for Carapella with one of the five elders of the tribe who is 80 years old and still speaks the language. The elder has worked through his retirement to try and keep the language going.

"We sat down with him," Carapella said. "It was just amazing. It really made me feel like this is why I'm here. This is why I'm doing the maps because I'm sitting here listening to this [elder] talk about how none of the young people want to learn the language anymore and none of the tribal leadership knows their language. He just feels defeated a little because people will come and ask him a few questions but they don't want to spend the time to learn it properly."

Carapella said that people like that are the motivation behind what he is doing today to try to keep as much Native and cultural knowledge alive as possible. But even the tribal name, Punca, which is on the map, is only the name used today. The tribe spells it with a k, Punka, to make it sound more authentic but that is still the Sioux's name for the tribe - not what they call themselves.

"Punca means cutthroat and it's another tribes' pejorative term to slander that tribe," Carapella said. "It's like Apache. Apache is a Zuni word meaning enemy but now most Apache's say 'I'm an Apache.'"

The elder told Carapella that the tribe's correct name is not in any books, it is not written down anywhere but he wanted people to know it. He is getting the correct orthographic spelling of the name so Carapella can put the correct name on the maps.

"He is one of the few people who actually know this information and I just happened to run into him," Carapella said. "Ten or 20 years from now when these elders aren't around or aren't able to do this work anymore, it's very possible that that tribe's name could just disappear."

The bibliography Carapella is building to go with his maps shows that just because a tribe's name is derived from an Indian word or sounds Native does not mean it is their correct name.

"Eskimo is an English bastardization of the Cree tribes' pronunciation for the Eskimo, which means raw meat eaters," Carapella said. He added that the name was a description of what was different about the people who lived north of the Cree tribe and who did not cook their food. Their pronunciation was similar to Eskimo. "Eskimo people are very offended by that term. They call themselves Inuit or whatever they feel the proper term is."

"Hundreds of tribes are in that boat where they have another tribes' name [for them]," Carapella said.

He explained that Lewis and Clark used to encounter Native tribes in their explorations and get names from one tribe for another tribe - one the explorers had not even encountered yet. That was not uncommon and sometimes solidified a name that was not the tribe's name for themselves.

Navajo comes from Spanish, which is really Navaja, meaning knife. Carapella said that the old people, the Navajo's, before the reservation period, were known for carrying around an obsidian blade on their hip. The Spanish called them Navajos, a person carrying a knife.

"It's not necessarily a negative," Carapella said. "You hear a lot of Navajo people say interchangeably Diné or Navajo. And, of course, Diné is proper because it's their own name."

There are very few tribes in the United States whose real name is also the one they commonly go by. The Hopi tribe is one of them.

"I don't know why their name was respected," Carapella said. "Maybe because it is easy to say Hopi."

His maps are meeting with success. For the past couple of years he has been able to work on them full time. One has even gone into a textbook. For Carapella, that is a long way from his days as a hard-core activist. At 15, he would go to city council meetings with older people and be angry that the council were destroying a burial ground or not respecting a tribe's sovereignty in some way. He said he was very idealistic and not happy with the way he felt the country treated Native people.

"I would get these blank looks from these people in higher positions," Carapella said. "And now, it's like I'm in the belly of the beast a little bit. My maps are working their way within the system. I would have never imagined myself as a teenager doing anything that was trying to educate from within."

But as time goes on he sees the importance of trying to change the viewpoints of people from within organizations or within a school system even while he believes in the need for people to protest and take things head on.

"If there is a piece of land that is going to be destroyed, if everyone just sits around and lets the bulldozers to their thing, then that sets a precedent," Carapella said. "It is good to stand there and literally put your life on the line for something you believe in. But at the same time, the reason most Americans disrespect or do not understand Native culture is because they haven't been exposed to it."

Even though the textbook his maps is in is a Native American studies textbook instead of American history textbook, Carapella has hope that over time he will get the maps into other textbooks too.

"I think when other Americans sit and think 'Yeah, why is there a map that has all these names that I've never seen before, what's going on with this,' that alone might inspire some thoughts like maybe I should rethink my concept of Native American history."

It is important for Carapella that the maps get into Native schools where younger Native American kids have access to them.

"Some kids are kind of lost and they're not really sure how to balance their traditional ways with today's times," he said. "I think seeing these maps in a professional setting, in a place they would expect to see only things from an outside culture, just reinforces some pride maybe."

He wants Native American kids to understand that their generation are the last members of many tribes who can or will be able to speak their language without some dedicated effort to change that.

"In most tribes there are one or two kids who have dedicated their lives to maintaining their language," Carapella said. "But for the most part, it's too hard to be going to school and fitting in and you're learning the grammar of an ancient language."

While the maps have been successful, Carapella still tries to keep things in balance. Last year he donated 900 maps. He realizes he could make more money but that is not the most important thing to him.

"The maps are a little pricey," he said. "I have to make a living but every time I make a big sell I give maps away because I feel bad. I feel like I have to balance it out a little bit."

And, even more important to Carapella are all the people who talk to him and give him information that he incorporates into each map he creates.

More information about Carapella's maps or his bibliography can be found at http://www.tribalnationsmaps.com.