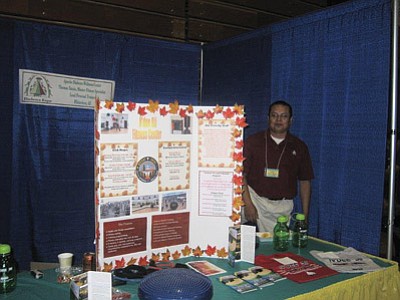 KYKOTSMOVI, Ariz. - The Hopi Special Diabetes Program is putting on a diabetes expo at Hopi Veteran's Memorial Center to educate and motivate people to adopt healthy habits to reduce the impacts of obesity and type 2 diabetes in Hopi/Tewa communities.

The expo will take place Nov. 2 from 9 a.m. to 2 p.m. The expo will give participants the opportunity to learn about diabetes, healthy eating, active living and overall wellness under one roof. The event is free and open to the public.

"Anyone interested in learning about their health should attend and take advantage of all the information that will be made available," said Valerie Nuvayestewa, diabetes prevention educator for the Hopi Special Diabetes program. "For some it will mean looking at ways to improve the health of their families and feeling better about making those changes."

Nuvayestewa said one of the most important aspects of the expo is learning about how diabetes affects the body and to realize what people lose by not paying attention to their health.

"Just seeing our kids getting bigger and bigger - people are starting to accept that that's how it is going to be," she said. "I don't feel we should accept it. I feel that we need to change things and go back to our traditional foods, the way were supposed to be kept physically fit because of our cultural ceremonies."

Nuvayestewa's nephew, a freshman in high school, is already dealing with a diagnosis of diabetes, which makes the issue hit home for her.

"It's scary," she said. "He's having to already deal with doing insulin shots. We need more awareness and we need to not be accepting of our kids being this big."

With intermarriage among tribes, the kids are bigger than they were in the past, but Nuvayestewa said the food people are eating is also a cause.

"We really need to change how we are eating, the amount of exercise we are getting and making sure that the kids are getting that at school through PE, too," she said, adding that PE classes are generally too short during the day and are sometimes only allowed at the discretion of the teacher. "I just want to get people back on track and that it ties into our culture."

The motivational speaker for the event Nephi Craig, executive chef at Sunrise Park Resort, is also the founder of the Native American Culinary Association. He explores the ways Native foods are important to the health of cultures and is passionate about bringing Native traditional foods and produce back to the table.

"Native foods are not a trend," he said. "They are a way to recover our communities and decolonize ourselves."

He explains that during the commodity era, when the government used to give Indian communities rations, was when fry bread came into existence - but it is not a traditional Native food. The rations Indian communities were given were high carbohydrate high fat foods.

"He is trying to get us back to all the traditional foods we should be eating," Nuvayestewa said. "We do have all this knowledge, we do have all this food, raised for centuries but we don't even use it ourselves, unless it is for ceremonies or baby naming, we hardly cook traditionally anymore in the households on a daily basis. That is what we need to start bringing back in the home."

The Special Diabetes Program also is involved with a Farmers Market that the Hopi Foundation puts on. Nuvayestewa hopes to start a trade and barter program on Hopi, which is a traditional way of spreading food throughout their community.

"We just want to make sure that people have access to healthy foods," she said. "The prices are really high out here and people have to go a long distance to purchase it elsewhere. We are trying to find ways to bring the food here."

She also wants to start some community gardens through the Special Diabetes Program - one of the presenters will talk about her experience with that.

She would like to have family fun nights at the schools that would bring information to the kids and to their parents as well.

"Just bringing back awareness and education to the kids, our younger generation, who are facing this challenge with obesity and the poor diet - the young parents, too, need to be educated on what they are feeding their kids, Nuvayestewa said. "They just don't realize how much sugar and fat is in a lot of our processed foods."

The expo will also have informational booths on tobacco preventions, substance abuse, cancer support services, gardening and much more.

"Come join us for the expo," Nuvayestewa said. "Learn more about what you can do to improve the lives of yourself, your family and your community so that we may become a stronger, healthier Hopi/Tewa Nation."