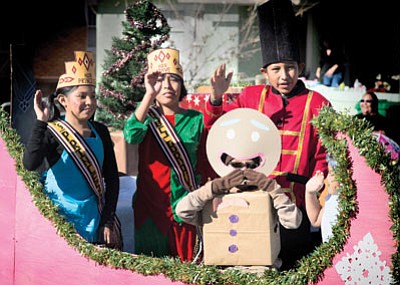 The Hopi Day School Princess and Brave wave to the crowd during the Winslow Christmas Parade Nov. 21. Todd Roth/NHO

Thousands of people attended Winslow's annual Christmas parade, which made finding a good viewing spot a bit a of a challenge. Bob Hall and Angelia Gonzales of the Winslow Chamber of Commerce orchestrated the event as they have for the past twelve years.

Hall said the number of vendors this year numbered around 500. No vender fees at the event likely helps keep vendors coming back to the event. Anyone serving food is required to have a County Food Handling Permit.

Hall said putting on the parade and festivities gets a little easier each year.

"It gets easier each year as we build up experience. Another factor in making it smooth running is that we start organizing and preparing, months in advance," Hall said. "As a result, most of the last minute mix-ups are nonexistent. This year's theme was "Sights and Sounds of Christmas."

Hall said a small kids' carnival behind the Visitor Center added to many childrens' enjoyment.

Gonzales said the number of parade entries this year was about the same as last year but with a noteable absence.

"As of the day before the parade we had 66 parade entries which turns out to be an average number, but unlike past parades there were no Native American dance groups signed up to march in the parade," she said.

By parade time more than 67 entries lined up at the staging area.

"The Grand Marshals were Sue and Dale Hancock, long time Winslow residents who for many years operated a prolific construction company here in town," Hall said. "Making them Grand Marshals in our 2015 parade is one small way to honor their service to Winslow over decades."

Just before the parade started at 1 p.m., Hall presented a plaque to the Hancocks honoring them for their decades of contributions to Winslow.

The parade route follows a long upside-down U shape, beginning and ending at the Visitor Center, traversing Third and Second Streets as it makes its way through thousands of watchers. The parade takes more than an hour to pass any point on the route.

The last float is Santa and sleigh on a Winslow fire truck. As Santa passed the judging stand at the parade start region, signaling the end of the parade, viewers began moving off to their cars and homes. That's how it ended -spectators melting away as Santa passed their area.

By early evening the only evidence of the parade were the sidewalks, curbs and overflowing trash cans with discarded wrappers and papers and a few die-hard vendors selling their wares at the intersection of Third Street and Williamson Avenue before darkness fell. Let the holiday season begin.