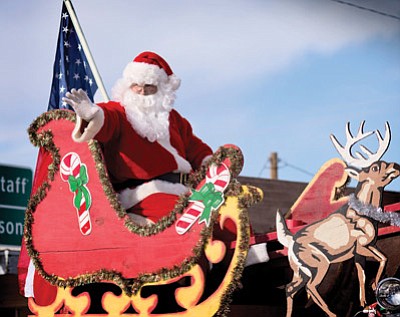 WINSLOW, Ariz. - The Winslow Chamber of Commerce and the city of Winslow present the 69th annual Christmas Parade Saturday at 1 p.m. This annual event is one of the largest parades in northern Arizona, drawing residents and visitors alike from all around the state, with as many as 10,000 attendees in previous years, many of them Native American.

"That makes the Winslow Christmas parade the longest consecutive and most attended annual event in northern Arizona," said Bob Hall, executive director of the Winslow Chamber of Commerce. "It's a tradition the community is proud of."

This year's theme for the Winslow Christmas parade is "The Sights and Sounds of Christmas." Lifelong residents of Winslow Dale and Sue Hancock are Grand Marshalls for the parade this year.

The parade, which always takes place the week before Thanksgiving, heads along Historic Route 66 with both Second and Third streets closed down for the parade route.

Vendors will line both Second and Third Streets, where visitors can stroll looking at arts and crafts, clothing, jewelry, toys, holiday decorations and more. The stores will all be open and the streets closed.

"It's fun for everyone, young and old," Hall said. "Because all day long, we've got hundreds of vendors, prior to the parade lining Second and Third streets, and activities for the kids, with arts and crafts, jewelry, clothing and toys. People have a blast just strolling."

This year there will be a toddlers' carnival along with other activities that go on all day starting at 9 a.m.

Santa Claus will visit Winslow, too. In addition to bringing up the rear of the parade, he will be at the Winslow Visitor Center (523 W. Second Street) from 9 a.m. to noon. There will be face painting for the kids, which is free, and Santa will hand out goodie bags.

"What kid doesn't want to sit on Santa's lap and tell him what they want for Christmas," Hall asked. "It's a good photo op."

Hall said in addition the parade brings lots of people home, who may have grown up in Winslow or in the area and live elsewhere. They line the parade route or participate in the parade.

Hall said while the chamber sponsors the event, it is a citywide undertaking with a lot of help from many in the community. Hall said the parade is a great opportunity for businesses to advertise, too with a built in audience of thousands of people.