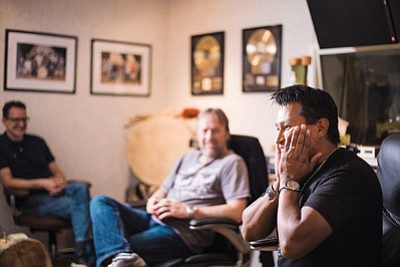 Jonah Littlesunday is overcome with emotion while talking about his journey to becoming a Canyon Records recording artist while Stephen Butler, Canyon Records director of production, and Russell Marsden, recording engineer, look on. Ryan Williams/NHO

PHOENIX, Ariz. - Jonah Littlesunday stands behind a microphone in a soundproof room playing his flute with his eyes closed - he is lost in the music he is creating. Just a mic and a flute - a safe place where he thinks of playing for his grandparents or his wife and kids. It's a familiar place where he is comfortable.

In another room, watching him from behind a sound board and large screens and recording and taking notes every moment that Littlesunday plays are Stephen Butler, director of production, and Russell Marsden, engineer, both from Canyon Records. Canyon records produces and distributes Native American music and recently signed Littlesunday as one of its artists.

If Littlesunday opens his eyes, he admits he might let his nerves get the best of him. So he keeps them closed to calm himself so he does not get overwhelmed by where he is.

"When you're looking from the outside, you're like, 'oh, I can't be in there' but when you're inside, everybody makes you feel so comfortable, so natural," Littlesunday said. "You kinda take a step back and realize where you are and that's when your palms get sweaty. It's just like 'oh gosh. Oh gosh.' I think when I get home I'm going to think, 'did I just do that?'"

The road to becoming a Canyon Records artist has been long for Littlesunday. Despite the attention from auditioning for America's Got Talent, Littlesunday lost his home - he and his family have been homeless, living in a tent and living out of his car. They have been kicked out of the campground he was staying in after dogs attacked Littlesunday's dogs and the police were called.

"It was intense and hard," he said. "It was a day to day thing. But I still had my family and we kept together. Going through that, you either let the anger build up or you just let it go."

Some of his anger was directed at America's Got Talent. The producers of the show have called him again, after Canyon Records gave him a contract, expressing interest in having Littlesunday on the show for the 2016 season.

"Wayne Silas, Jr. just showed up yesterday and I was like, 'wow,'" Littlesunday said, adding that he was impressed that Silas showed up just to say "hi" to Butler, a friendly and human approach that Littlesunday knows he can benefit from.

It was by chance that Littlesunday came to Butler's attention at the Arizona State University powwow. Butler was introduced to Littlesunday, but it was not until the supper break that Butler first heard him play. Even while kids were running around and people were relaxing, Littlesunday got people to listen to his flute playing.

"I just knew immediately that he has something to say," Butler said. "He has talent, he has artistry. There was a sincerity there that for us is very important. There are lots of good players out there technically but if they don't have the heart to connect it to, then it doesn't really bring people together. It doesn't really reach to everybody. Jonah has that ability to touch the humanity in everyone. And that is a very important quantity."

It is that quantity that convinced Ray and Mary Boley to form Canyon Records in the first place back in 1951. Ray heard a voice that touched him deeply, Ed Lee Natay's voice, and that moment formed the basis of Canyon Records' connection to Native American music.

"That possibility that you can be moved by something that you have no experience with, that you don't understand," Butler said. "It requires openness. That is something that has been inherited by everyone here. The artist is important as a human being. But because we are non-Native, we also understand our job isn't to interfere with anybody's cultural expression, unless they ask us to."

"That honesty becomes a very important thing," Butler said. "I've seen non-Native people break down in tears when they hear a flute player. It goes beyond what they ever could have imagined, that something would move them. Jonah had that. Jonah had that quality to bring people together. Suddenly it's music, suddenly it's honesty, it's artistry. It's a Navajo man being true to himself but it's transcending everything while remaining true to its roots."

The people at Canyon Records, one of the oldest independent record labels in the music industry as well as one of the oldest cultural institutions in the state of Arizona, have always felt it is important to get Native American music to listeners in North America and beyond.

"That's why we try to reflect the beauty of its artists out in any way we can," Butler said.

Littlesunday and his family are now living in a RV, rent free, thanks to the kindness of an older couple Littlesunday met at one of the camps who heard Littlesunday's story and were moved by it.

"I think if I would have let my anger consume me, it would have come out different," he said.

Littlesunday knows that dealing with everything that has happened to him, and everything that will happen in the future, is all a matter of perspective. He loves his boys and his wife. His grandparents had a hard life and he knows that other people have experienced hard times, too. The generosity of the couple who let him stay in the RV or the many people who are telling Littlesunday to hang in there all have an impact.

"As a father, you've just have to step up," he said. "I am just so grateful to be out of that tent, to be off the cold ground. You never know where life will take you. Here I am at Canyon Records."