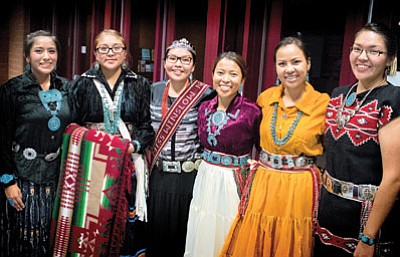 WINSLOW, Ariz. - Winslow High Schools Tribe of Many Feathers sponsoed the Winslow High School Native American Pageant Nov. 10. Teachers and staff including Gloria Alcott, Nathan Brady and Miriam Stacey coordinate the group. Friends and families of the contestants attended the event with about 55 people watching the proceedings and encouraging each contestant.

The first part of the event, which included essay evaluation and interviews, took place in Mr. Bradley's classroom. After that the girls moved into the library with their Native dress and prepared to be judged on appearance and a demonstrated skill related to their heritage.

The second runner up was Britni Billy and the first runner up was Chelsea Wagner. Jamie Brady was crowned as the 2015-16 Miss Winslow Native American.