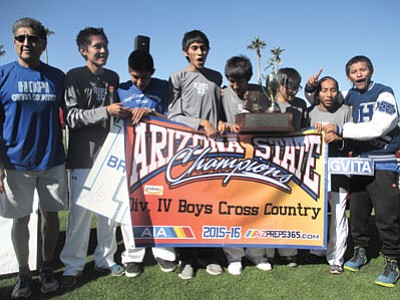 None of the runners were born when the Bruins won the first championship, but that doesn't mean that they don't appreciate the tradition that has led them to this point.

Zhariff Lee from Many Farms was the individual state champ and Hopi's Diome Talaswaima was the runner-up. The other members of the Hopi High championship team were Andre Lucas, ninth; Jihad Nodman, 11th; Darion Fredericks, 12th; Iversen Qumyintewa, 25th; Steven Baker, 45th; and Trey Lomayestewa 55 in the 195 runner race.

Talaswaima, a 17-year-old junior, said he felt strong after the Bruins won their state title.

"It was important to win because of pride and tradition to Hopis because we Hopis have never been recognized by anything," he said.

Talaswaima said he ran to his potential. He said his teammates also ran as well as they could.

"I trusted them and they ran to their full potential," he said.

Talaswaima said recent national media attention from The New York Times and ESPN made the runners feel good. He hopes to run cross-country in college.

His message to his teammates is to trust their training and believe in themselves.

"Trust your training, believe in one another and Nahongvita," he said.

Lucas, a 17-year-old junior, said it was awesome to be a part of these fine runners who work hard and finish strong.

"It was important to win state because the community was behind us and we had to give back to our community," he said.

Lucas said he wasn't used to the national media attention. He plans to run cross-country at the University of Arizona.

His message to his teammates is "great job and do what's best for you." He said Baker helped him by getting him to believe in his training. His advice to incoming runners is to run during the winter, run track and then run during the summer to prepare for the 27th consecutive state championship.

Nodman, a 15-year-old freshman, said it was awesome and spectacular winning state.

"It was important to win state because we didn't want to lose the streak," he said. "We wanted to keep it going."

Nodman, who is considering running cross country in college, said his message to his teammates is "congrats and Nahongvita."

"Coach Baker kept pushing us and kept us from not giving up," he said.

His advice to incoming runners is to work hard, run during the summer and break the mental boundaries.

"You don't want to be the team that breaks the streak. Win it for the people back home," he said.

He did his best to ignore the national media attention..

His message to his teammates is "good job and good luck to the underclassmen." He credits Coach Baker with helping him improve.

Qumyintewa, a 17-year-old senior, said winning the state title made him proud considering this was his last meet.

"It meant everything to us to win state and the Hopi Senom," he said.

Qumyintewa also felt that he and his teammates ran to their potential. He said the weather didn't impact the race at all. He was nervous about the national media attention, but felt the interviews went well.

His message to his teammates is to train hard during the summer so they can win number 27. He said Baker helped him in every way from long runs to short runs.

His advice to incoming runners is to train hard and be the top seven guys.

"The key to winning was training hard and trusting our training," he said. "The weather was great because it was nice and warm."

Baker said the race wasn't that close because the Hopi runners gave their best effort. He also felt that he ran to his best potential.

He said it was hard running for Coach Baker because he's his dad.

"I am really looking forward to next season to improve my running," he said.

Lomayestewa, a 15-year-old sophomore, said it was awesome winning the state title.

"It was important to win state because it is our tradition and we have a state title that we didn't want to let go of," he said. "We did it. We fought to be state champs."

He said the weather was great and the heat didn't get to them. He also enjoyed the national media attention. He said Baker helped him because of his training rituals.

"Run. Run. Keep the tradition and fight through the pain," is his advice to incoming runners.

"I think they ran to their potential," she said.

Lomakema said Honani, Day, Huma and Honwynewa all ran good races. She emphasized that Honani's time puts her among the elite runners in the state, an amazing feat for a freshman.

"Those four posted their best times of the year," she said.

Lomakema said the Lady Bruins strategy was to break up the Northland Prep pack.

"We felt if we did that then we were in the running to win. We did that, but not quite enough with our fifth runner," she said.

Day was Hopi's only experienced runner this year. Lomakema said when this young team gets more experience that they should do well at state next year.

"I'm telling them to get started early. Summer is the best time to get in shape. Creating that base is huge. It prevents injuries," she said.

Jaeda Honani, a 14-year-old freshman, said it felt good that the Lady Bruins finished third because the Hopi runners tried their best.

"I ran to my potential because it was the last race of the year and I almost fell over at the end," she said.

Honani said the Hopi girls mostly ran in a pack.

"But there were some gaps," she said.

She said the nice weather did not impact her run. She said she had an ankle injury earlier this season, but felt fine at state.

Honani said that she would train all summer because she can't wait for next cross country season.

Jennaya Day, a 15-year-old junior, said finishing third at state this year was good for the season they had.

"I'm sure a lot of people didn't see that coming because of the times we had during the season, but I am happy we placed," she said.

Day said the state race was her best race of the year. She said she worked through shin splints and knee problems this season.

She said she loved Lomakema's coaching.

"She is a great coach who believed in us every step of the way," she said.

Day said she plans to run often during the summer to prepare for next season and she also wants to run in college.

"I will strive to run in college," she said.

Latifah Huma, a 14-year-old freshman, said placing third at state was okay, but she knows the girls could have worked harder.

"The team didn't run to our potential because our team goal was to win state," she said. "We didn't make our goal happen. I know we worked hard and we tried."

Huma said the weather was cool, but she liked the lower elevation because she could breathe easier.

"I think that was why I ran hard and fast," she said. "I could improve by running all summer and every day."

Huma was happy with herself because she felt she ran to her potential and she did what her coach wanted her to do. Huma fought through a heel and a hip injury during the cross-country season.

She credits Lomakema because she taught her how to improve.

"All I wanted to do for my coaches was to make them proud of me. All I had to do was listen to them and do what they tell me to do," she said.

Huma said she's excited about running next year because now she knows what it's like to run. Her goal for next season is to win state and to be a better runner.

"I had a great year with all the girls this year. I met new people and made new friends," she said.

Lauryn Honwynewa, a 14-year-old freshman, said finishing third made her happy because she didn't think the team would finish that high.

"I ran to my potential and I tried to stay with my teammates who were in front of me," she said. "My goal was to stay with our second and third runners."

She said the top four Hopi runners did a good job of running in a pack.

"I kept my grades up during the season because if I didn't then I wouldn't have been able to run," she said. "The weather was great because it was sunny with a little breeze."

Honwynewa had to work through knee injuries this season. She plans to run during the summer to get ready for next year.

'I look forward to running next season," she said.

Perlynn Lomahoema, a 17-year-old senior, said placing third was good, but that the Lady Bruins hoped to finish as runner-up. She said Hopi had a strategy, but came up short.

She said Hopi's top four runners did a good job of staying together during the race. She plans to improve by running during the summer. She said injuries were a problem for the Lady Bruins this year.

"But we tried to work with them with ice and rest," she said.

Veronica Casuse, a 14-year-old freshman, said the Lady Bruins could have done better. She felt she ran to her potential.

"I ran so hard it felt like my legs were going to give up on me," she said. "It was good, fun and challenging running for Coach Lomakema."

She was proud that she kept her grades up during the season. She plans to practice on her own to keep improving for next year.

Lomahoema said the Lady Bruins did a good job of keeping their grades up this season. She praised Coach Lomakema.

"I ran for her for four years and she is a very good coach," she said.