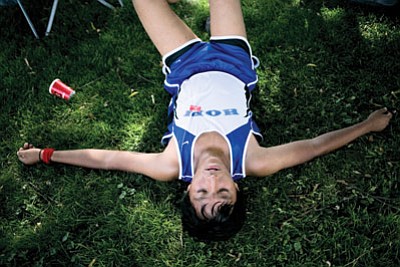 ORAIBI, Ariz. - Above the creased high-desert landscape of northeastern Arizona, the Hopi village Oraibi, continuously inhabited for nearly 1,000 years, sits atop a blond mesa crumbling at the edges.

Each fall, during one of the Hopi calendar's dozen or so ceremonial races, a hundred or more Hopi men gather in a pack on the scrubby plain below, all muted tones of mustard yellows and sage greens. A woman in Hopi dress holds a woven basket in the distance. Onlookers shout, "Nahongvita" - loosely, "stay strong" or "dig deep" in Hopi. A signal is given.

To the Hopi, to run is to pray. And the men run, several miles, past the bean field, beyond the barely marked graves of ancestors, around the decayed facade of a Spanish church and up the precariously steep passages to the top of the mesa, where they are received by a chorus of thanks - "asqwali" from the women, "kwakwai" from the men.

Juwan Nuvayokva, a former all-American cross-country runner at Northern Arizona, has been the first to the top in dozens of Hopi races. And he would probably win the one scheduled for Saturday in Oraibi, where he was raised, if it did not fall on the day of Arizona's high school cross-country championships, in suburban Phoenix.

Nuvayokva is an assistant coach for the boys' team at Hopi High, vying for (winning) its 26th Arizona state championship in a row.

Its streak is the longest in the country for cross-country and the fourth-longest active run for any high school sport, boys' or girls', according to the National Federation of State High School Associations.

"Hopi have that running blood in them," Nuvayokva said. "It's up to us to find it and use it."

Hopi High, as modern as any suburban school, has about 400 students in Grades 9 to 12. Before it opened in 1986, many Hopi teenagers, like those from other tribes, went to Indian boarding schools in faraway places.

Among them, more than a century ago, was Lewis Tewanima. Sent to Carlisle Indian Industrial School in Pennsylvania - where he was a classmate and track teammate of Jim Thorpe of the Sac and Fox Nation - Tewanima became a two-time Olympian. He finished ninth in the marathon at the 1908 London Games and won the silver medal in the 10,000 meters in Stockholm in 1912. He remains a Hopi hero, and an annual race is held on the reservation each year in Tewanima's honor.

Rick Baker, 56, grew up in the Hopi village Tewa and ran cross-country 80 miles away at Winslow High and then in college in Oklahoma. He was hired in 1987 as a Hopi High physical education teacher and coach and was asked to start a cross-country program.

"A lot of schools with Hopi kids had won state championships," Baker said. "And I thought if we could get all the Hopis here, we should have a pretty good team."

His first three boys' teams finished in the top 10 in one of Arizona's small-school divisions. His fourth, in 1990, won the state title. The team has won every one since.

The championships are a point of pride, but Hopi modesty inhibits boasting. The 25 state championship trophies are scattered in a small storage room, five of them on the floor, two on a plastic bin next to a bike tire, one of them broken.

But the pressure to keep the streak intact is palpable. Boys on this year's team admitted to nerves, and Baker uses the streak as motivation - do not be the team that breaks the streak.

"I don't want to be part of the team that doesn't win the 26th in a row," the freshman Jihad Nodman said.

Darion Fredericks, a senior, said he knew that the team was watched, both by opponents around the state and by Hopi on the reservation.

"They know what we're capable of," he said. "I definitely feel the eyes on me, even in the community. They say, 'Hey, you're the one that runs.'"

A Test of Depth

Success is built on endurance, not speed. While Hopi High has had its share of individual state champions (Nuvayokva did it twice), winning a team title requires depth. Courses are generally 5,000 meters, or 3.1 miles. Time is less important than order.

The finishing place of each team's top five finishers (out of seven starters) are added together for a team score - 1 point for the overall first-place runner, 2 points for the second, 10 points for the 10th, 100 for the 100th, and so on. The team with the lowest score wins. A perfect score is 15, if a team sweeps the first five places. The Hopi did that at state one year.

"A lot of our kids don't have a lot of speed," Baker said. "If you timed them in the 400 meters, they probably wouldn't break 70 seconds. But they have endurance. They can run and run and run."

In early October, a Hopi High bus, painted in the school colors, blue and white, drove five hours to a night meet in Casa Grande, between Phoenix and Tucson. Members of the boys' cross-country team sat in the back half of the bus. The girls' team, the winner of 22 state championships in 28 seasons - a seven-year string was broken last year - sat in the front.

The teams sometimes travel together, but they have different coaches and do not practice together. At the Casa Grande meet, they got off the bus and headed different directions into the cool night.

They were quickly absorbed into an athletic carnival, acres of uniformed teams wandering to and from the course and huddled around team tents. The course crossed soccer fields, a stretch of dirt and a golf course and then snaked back along several fairways to the finish. The air was filled with dust and the sound of generators powering temporary lights.

Baker was nervous. A quiet and poised man, with glasses and spiky black hair lightly freckled with gray, he felt that this year's team was vulnerable. The team was young. It had melted in the heat of a meet in Phoenix the week before.

More broadly, Baker had found it increasingly difficult to find Hopi boys dedicated to running. Fewer committed to the summer running program. There were too many distractions these days. This could be the year that the streak ended.

"People stop me and say, 'How's the team doing?'" Baker said. "They know we didn't start too well. But they say, 'You'll be ready at state.'"

Hopi High ran in the meet's final race, with many of the state's biggest schools. At the start, Baker crowded in with his seven boys, including his son Steven, a sophomore.

"Nahongvita!" they shouted together.

The starting gun sounded. Baker and Nuvayokva watched a colorful blur of 100 runners fade into the dark of the golf course. Because of the serpentine route, they could jog to a spot on the course to watch and then move to the next switchback to watch the runners pass again, repeating the pattern several times toward the finish.

He and Nuvayokva share an ability both to count runners ("You're in 70th! Move up!" Baker shouted to one of his athletes) and to tally rivals ("That's their fourth! Their fifth!" Nuvayokva shouted as boys from Sedona Red Rock High blurred past).

With each Hopi runner, Baker's calm deportment gave way to full-throated screams and hand gestures. He sometimes ran alongside the runners for a few strides and shouted instructions into their serious faces.

Another Hopi was told in the final mile that his score was going to count.

"You're No. 5," Baker called, imploring him to sprint and pass as many opposing runners as he could. "Ten guys! You can catch 10 guys!"

Individual Hopi runners finished nowhere near the top, and because of a registration glitch, their efforts were not recorded. Still, Baker boarded the bus relaxed and relieved. He saw progress. The bus stopped at Little Caesars to pick up 16 pizzas and then unloaded the boys and girls at a nearby Holiday Inn Express at about 11 p.m.

"Be glad; be happy you finished," Baker told the boys in the lobby. "But don't be satisfied. Because there's more in you somewhere."

He scheduled a five-mile run for 7 a.m. When the Hopi stayed at the same hotel last year, their morning run took them past a cotton field, and Baker grabbed some to use for a couple of Hopi ceremonies. The field was gone this year, plowed over for a strip mall.

The boys huddled before heading off to bed.

On the reservation, the low and distant edges of the sky are pierced by spires and plateaus. The 12 villages of the Hopi reservation, surrounded by Navajo land, are connected by the two-lane thread of Highway 264, which winds over and among three large mesas - helpfully named First Mesa, Second Mesa and Third Mesa - about 6,000 feet above sea level.

To the southwest is the snow-tipped summit of Humphreys Peak, the highest point in Arizona, part of a mountain range sacred to the Hopi, who believe it is home to spirits known as kachinas.

Three Fridays after the Casa Grande meet, as the morning sun lit Oraibi, the smell of burning wood and coal came from some of the houses. Like the perch itself, they are built of stone and sit in various states of surrender to time and gravity. Some are patched together with cinder blocks and clay.

The 150 or so residents of Oraibi choose to live with no electricity or running water, and there are 13 underground kivas used for village ceremonies. Each has a wood ladder poking through a hole in the top.

Nuvayokva, a 36-year-old who smiles his way through nearly everything, wore running shoes and jogged down through the broken edges of the mesa. Parts of the trail were sprinkled with pottery fragments.

"When we were kids, we were told to never pick them up," Nuvayokva said. "Otherwise the people who owned them before will come back and get you."

He ran onto the plain and shrunk into a speck, then looped up a trail and returned full-size a few minutes later. As a boy, he often ran to work in his clan's cornfields, one of them 16 miles away. Last year, training for a marathon, he often ran from the high school, 29 miles away.

Leigh Kuwanwisiwma, director of the Hopi Cultural Preservation Office, said that the tribe's tradition of running flowed from its scouts, men who directed tribal migrations and searches for water. (One of roughly three dozen remaining Hopi clans, the Lizard clan, supposedly got its name from such scouts, who were able to survive in the desert with little water, he said.)

Running was the method of sending messages between Hopi villages. It became part of ceremonies, too, which can last days. Photographs from the early 1900s show Hopi men lined up to run in ceremonial races like the women's basket dance race, most wearing loincloths and no shoes.

"They are for the blessings of the cloud people, for the rain, for the harvest, so we have a good life, a long life," Kuwanwisiwma said. "That's what these ceremonial runners do. They bring this positiveness to the people."

In some variations, the first to the top receives a gourd of water, which he then carries to his cornfield to bless the crops in all four directions. In other races, winners bury sacred tokens in the ground as offerings.

"It might sound a little funny, but running in cultural races is a lot different than running in high school or college," said Devan Lomayaoma, 33, who won two individual state cross-country titles at Hopi High, ran at Northern Arizona, teaches at a Hopi elementary school and has won many Hopi races. "In cultural races, you never got recognition for it. They have a deeper meaning."

"It's different than the Anglo culture, where you run and it's every man for himself," Nuvayokva said. "When I competed in the N.C.A.A., you're trying to beat others. Here, you do it for others."