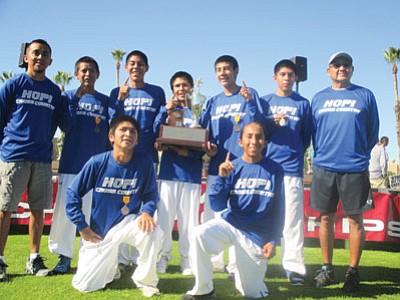 Thousands attended the meet including more than 200 fans from Hopi High School.

Hopi High's success has not gone unnoticed as The New York Times recently ran an article on the Bruins and ESPN was filming the state meet for a documentary that will air in about a year or two.

Hopi High won the state meet with 59 points. Many Farms snagged second with 129 points. Several coaches were talking about Many Farms running a great race, just not good enough to beat Hopi.

Many Farms' Zhariff Lee was the individual state champion. Hopi's Diome Talaswaima was the runner-up less than a step later as they both had a time of 16:34. The other members of the Bruins championship team were Andre Lucas, ninth; Jihad Nodman, 11th; Darion Fredericks, 12th; Iverson Qumyintewa, 25th; Steven Baker, 45th; and Trey Lomayestewa, 55th.

Hopi High Coach Rick "The Legend" Baker said winning the state championship this year was great because the Bruins were hesitant going into the season. Baker was ill heading into the Hopi Invite when the season started and it took several weeks before the Bruins started to come together.

"After sectionals, we finally had everybody on the same page," he said. "The kids ran a great race today. They exceeded my expectations. We didn't get into our groove until after the Holbrook meet."

Baker said Talaswaima, Lucas and Nodman all ran better than he expected. He credited all of his runners with running through some minor aches and pains. He also credited his runners even more for all remaining academically eligible.

After a cold, wet week at Hopi High, Baker said the weather was perfect for the state meet with the temperature in the 70s at race time.

Baker said the national media attention during the last couple weeks was good for the program and for the runners.

"But we're not used to it, and at times it was distracting. I told the runners to keep their eyes on the prize," he said.

But the main concern was Hopi High's slow start this season. The Holbrook Invite and sectionals put those concerns to rest.

"When it counted we were there," he said.

Baker will lose Fredericks and Qumyintewa to graduation, but he's not concerned.

"We have a strong JV crew. We'll get them together and get ready for next year," he said.

That will be a tougher task than usual because Hopi High will be moving up to Division 3, which includes larger and tougher schools.

"We must have a summer program. We have to start preparing now," he said. "It helps if you run during the summer, so make a decision (to go forward) right now."

Baker held a team meeting after the state title run. He told the runners that they ran a great race and exceeded his expectations.

"No matter where you placed it's all about the team," he said.

Baker said winning state is due to great runners and there is no secret to it. But he has one secret that he credits to his wife Debbie: the team's exercise workout, which his wife helped put together. He said the pasta dinners that she cooked for the team during the last two weeks also helped.

Bakersaid he thanks the fans for their extensive support.

"It was great to see them down here," he said.

Next week's edition of the Navajo-Hopi Observer will feature more details on the boys and girls race.