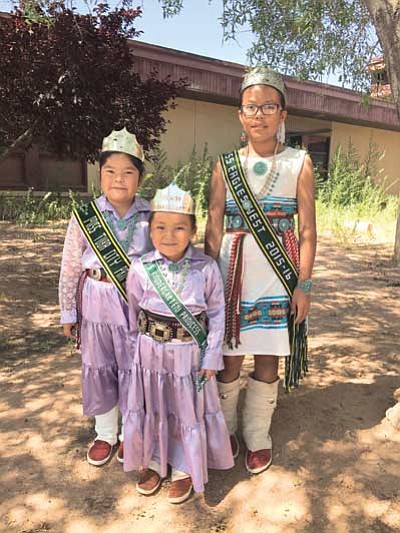 TUBA CITY, Ariz. - Fall brings a change of seasons with red and orange leaves falling and it also is the time to change out last year's royalty to crown some new representatives from local area schools.

This year, Tuba City Unified School District has some talented winners that will represent their schools at public, cultural and school related events.

The youngest of this year's district royalty is Alyssa Bennett. She is 5 years old and a kindergarten student at Tuba City Primary. From the Kinya'aani'nishti' and Lokia Dine' clan people she was born for Tse'deshgizhni and To'ahani' clans. Her parents are Alicia Bennett and Derrick Meyers. Bennett sang a Navajo lullaby song to win her crown this year and she wants to be a veterinarian when she grows up. She says her mom and dad inspire her and she wants to go to college when she graduates from Tuba City High School.

Second in grade level royalty is Maria Bilagody. She is 7 years old and in third grade. Princess Bilagody is from the Naasht'ezhi, Ta'chii'ini' and To'di'chii'ni' and Dilzhii (Yavapai Apache) clans. Her parents are Melissa and Michael Bilagody. Bilagody was originally born in Pennsylvania but moved back to Tuba City three years ago. Bilagody sang two songs to win her new title, an Apache and a Navajo song as well as singing the National Anthem in Apache. She wants to be a pediatrician when she grows up and is inspired by Princeton graduate and Supreme Court Justice Sonia Sotomayor.

The oldest of the district grade school royalty group is Aleathia Nellie Williams. She is in fifth grade. Williams is from the Deer Spring, Red House, Bitter Water and Tangled clans. Her parents are Deandra and Gene Luther. Williams performed a corn grinding presentation to win her title as Miss Eagles Nest Intermediate School for the fourth and fifth grade. She wants to be a teacher when she grows up. She is inspired by her cousin Taylor Begay who was the Miss Tiny T-Bird last year.