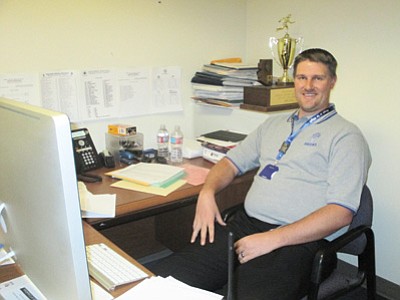 "Hopi High has so many great traditions and we want to build on those traditions," Greer said. "We want to make sure that we are doing things the right way."

Greer points to the boys cross-country program as a model program. The Hopi High boys cross-country team has won 25 straight state championships, which is a state and national record. He would like to bring the other sports programs up to that level.

This is Greer's first time serving as an athletic director, but at Winslow High School he worked closely with renowned girls basketball coach Don Petronovich, who was also the athletic director in Winslow. Greer learned a lot from Petronovich because he delegated a lot to the coaches.

Greer praised the Hopi High School football team, which has a 7-1 record. He said the girls cross-country team is almost equal to the boys with at least 20 state championships.

The Hopi High volleyball, girls basketball and boys basketball teams have been down for the last couple of years, but Greer said that is because of changes in the divisions where Hopi was scheduled to face many schools that are much larger. He said when a school with 400 students has to play schools with 1,200 students, the larger schools have better athletes to pick from among the student body.

Greer said next year the alignment will change again to six classifications giving Hopi a more competitive schedule than the one they have currently.

Born and raised in Winslow, Greer graduated from Winslow High School where he earned all-conference honors in basketball and baseball. He went on to play basketball at Chandler-Gilbert Community College. He also played summer baseball there where he had the chance to play on the same team with Andre Ethier, who now plays for the Los Angeles Dodgers.

Greer was interested in becoming a dentist, but started teaching science at Winslow Junior High School.

"I fell in love with teaching," he said. "It was a lot less money then dentistry, but I loved the interaction with the students. Every day was different."

One of the reasons Greer came to Hopi High was for the financial benefits, especially its good insurance program. But he also came to Hopi because he views himself as a leader and he views the athletic director's job as a leadership position.

"I enjoyed working with him (Gover) and it played a significant role in my coming here. Working with him again is an opportunity I couldn't pass up," he said.

Greer said working with Petronovich prepared him for this job.

"Petro delegated so much to the coaches that I was prepared for head coaching and to be an athletic director," he said.

Greer said his coaching philosophy is about developing players.

"If you develop players they will make good plays. One of the keys there is developing their fundamentals," he said. "Winning is important because the more successful you are the more people want to be a part of the program, but winning is secondary to developing character."

Greer said he looks forward to working with parents as he wants to be the bridge between the parents and the coaches.

"I want to have good communication with the parents, coaches and players," he said. "I'm excited to be here and be part of the community. Now, lets build on that good tradition."