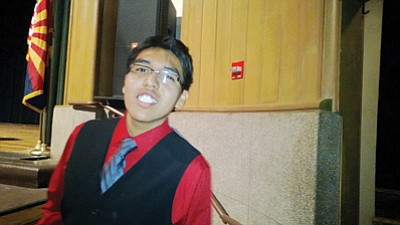 TUBA CITY, Ariz. - Taylor Huskon, the son of Mary Ann Clark and Leonard Huskon and a junior at Tuba City High School, has been selected to attend the 2015 Congress of Future Science and Technology Leadership conference in Boston from June 28-30.

The Congress is an honors only program for high school students who show a high aptitude in science, technology, engineering or mathematics (STEM). The purpose of the event is to honor, inspire, motivate and direct top students in the U.S. to become scientists and technologists by mentoring and helping them reach their final career goals.

Huskon was born in Flagstaff but was raised in Tuba City. He is from the Tsinaajiini and Honaghaahnii clans.

During the three-day congress in Boston, Huskon will join other high achieving students from all over the country to hear Nobel Laureates and Medal of Science winners talk about their scientific research. The students will also be given advice on how best to advance their science careers and learn about cutting edge advances in the fields of science and technology.

The Academy offers free service and programs to gifted students like Huskon who show a desire to learn more about their science and technology interests.

Huskon's mother, teacher Mary Clark, said that when Huskon was young he was initially diagnosed with ADHD and it was the quick eye of his Tuba City Primary School teacher Mrs. Tsinnie that helped their family with his diagnosis and treatment process and that this didn't hamper his academic interests.

Huskon said he would like to eventually attend MIT or Brigham Young University after he gets done with high school.

NASA astronaut Buzz Aldrin nominated Huskon. Aldrin serves as the Science Director of the National Academy of Future Scientists and Technologists. Aldrin was asked to make a student selection for this Congress to represent Tuba City High School.

"Focused and bright students like Taylor are our future and he deserves all the support and mentoring we can give him," Richard Rossi, executive director of the National Academy of Future Scientists.