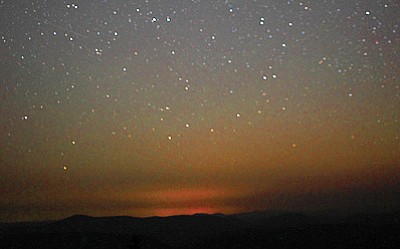 Efforts to preserve dark night skies for the benefit of future generations often begin with small groups of committed individuals. For nearly fifteen years, the International Dark-Sky Association has recognized these efforts around the world, but never before has an entire group of ethnically and linguistically related people come together to collectively embrace dark-skies principles.

The designation is a result of the Kaibab Band of Paiute Indians' work to protect the pristine night skies over its northern Arizona territory.

"It is especially pleasing to be able to honor the achievements of the Kaibab Paiute people on Earth Day," said IDA Executive Director J. Scott Feierabend. "Today's announcement is a tribute to all those involved in the International Dark Sky community nomination and a reminder that all of humanity shares just one night sky."

Roland Maldonado, tribal chairperson, sees the announcement as a reflection of the values of the tribe.

"The Kaibab Paiute reservation is meant to be preserved as our cultural homeland for its natural resources and untouched qualities," he said. "We acknowledge the immense value dark skies bring to our traditions, conservation of wildlife, and to future generations."

A commitment to environmental protection

The Kaibab Paiute Indian Reservation is a community of approximately 250 residents located on the Arizona-Utah border about 50 miles north of the Grand Canyon. The Kaibab Paiute are one of ten member bands of the Southern Paiute tribe of Native Americans who live along the southern Great Basin and the San Juan and Colorado River watershed. Members of the Nation speak an Uto-Aztecan Native language in addition to English. The reservation's lands total 120,840 acres and contain five tribal villages as well as Pipe Spring National Monument and the non-Indian community of Moccasin.

The Kaibab Paiute people believe that they have a special responsibility to protect and manage their lands and water. In recent years, the Nation has come to recognize the value of dark skies over their lands as a threatened resource worthy of conservation. Despite their small population, the Kaibab Paiute have made a clear and concerted effort to improve the quality of outdoor lighting on the reservation, adopt and implement a quality lighting plan, and raise awareness of the issue both on and beyond the reservation.

"The Kaibab Paiute Tribe and its people have depended on the night sky for guidance, cultural awareness and preparedness for life's great journey upon mother earth," explained Kaibab Paiute Environment Department Director Daniel Bulletts. "Being accepted into the International Dark Sky Association is an honor and the tribe hopes to bring awareness to light pollution not only for the tribe but for our surrounding towns and cities."

The Kaibab Paiute have long held sacred the natural environment of their northern Arizona home including the dark skies over Thunder Mountain, a landform that dominates the reservation landscape and features prominently in Kaibab Paiute folklore. The new Dark Sky Community will be officially known as "Thunder Mountain Pootsee Nightsky." The name recognizes the status of the Kaibab Band of Paiute Indians as a sovereign nation, the importance of Thunder Mountain and the night sky in Kaibab Paiute culture, and the unique language spoken by Southern Paiutes.

The tribe takes every opportunity to share its night skies with visitors. Outreach and educational activities center on Pipe Springs National Monument, the site of most tourist visits to the reservation. Annual events at the Monument such as "Winsor Castle by Night" and "Dark Wings at Pipe Spring" highlight the importance of natural darkness to the cultural heritage and biological conservation efforts. Night sky viewing through a telescope is a regular feature at the "Dark Wings" gatherings.

Already, their successful bid for IDA recognition has generated interest among other Native American tribes in applying for the same recognition. The Kaibab Paiute hope this will inspire other nations around the world to follow its lead, protect their night skies, and realize the cultural, social, and economic resource they represent.

"We need to smile when we look up to the sky at night, not squint and frown and look down," said a Kaibab Paiute tribal elder.