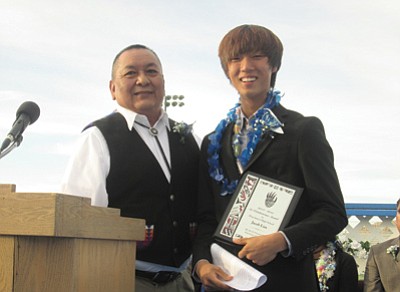 Approximately 85 students were promoted during the promotion ceremony May 21 at Bruins Stadium.

Sekaquaptewa and Davis both completed their first year at Haskell College in Kansas where they also both played football.

The pair went to the microphone at the same time as they took turns speaking back and forth. Sekaquaptewa was wearing sunglasses while Davis wore a cowboy hat.

Davis recounted how he was at his Hopi Junior High promotion six years ago. He urged the students to take high school seriously because time goes fast and there's a different world after high school.

Sekaquaptewa recalled how he made memories in high school, especially with the football team where he knew every member of the squad and felt like they were his family.

"That connection lasts forever," he said. "I remember seeing the joy of community members for sports and academics."

Sekaquaptewa served in the National Honor Society, which every year delivers food to the elderly just before Christmas break. He said seeing the expressions from the seniors was priceless. He told the junior high students to give back to the community and do whatever they can for other people even if it's just opening a door for somebody.

"I started football by playing just outside in my yard," he said.

Sekaquaptewa warned the students that having dreams doesn't mean they won't face tough challenges along the way. He said that's what makes time management crucial.

"It's not easy balancing sports and athletics, but if I didn't manage my time to do academics I couldn't have done athletics," he said.

Sekaquaptewa said when he joined the football team he did not want to continue with a losing record, so he pushed himself to the limit.

"If everybody didn't work hard, we wouldn't have been successful," he said. "I knew the team had potential and I wanted to bring it out, so push yourself and make a name for yourself in high school."

Davis told the students that success comes when people work hard. He didn't want to just finish high school, he wanted to excel. However, he was a student with special needs - a student with a learning disability.

"I continue to have a learning disability to this day, but I don't let that hold me back. I don't use that as an excuse," he said.

Davis was good at academics and athletics and served in Hopi High's Junior ROTC. He excelled and he told the students he expects the same from them.

Sekaquaptewa said when students are considering doing something they should take into account whether it will help them reach their goals or whether it could cause a setback.

"You have to live with the consequences," he said. "We all make mistakes, but try to limit them."

Sekaquaptewa told the students that they shouldn't settle to be average.

"Your teachers and coaches can only teach you so much. It has to come from within," he said. "Be different as long as it benefits you. We all want to see you succeed. Best wishes."

Co-Valedictorian Jason Lim told his classmates that he was thankful that he was treated equally even though he was different. He said he had a great journey with the basketball team this past school year and he will always remember that. He thanked his teachers for the past two years for the memories.

"I wish you all the success in the future to achieve your goals and see you at the top," he said.

Co-Valedictorian Jaeda Honani said she remembers coming to Hopi Junior High two years ago from Tempe, and on the drive out she thought she would become valedictorian. So, she was extremely happy to reach that goal.

"This was the best two years of my life," she said.

Honani recalled meeting Lim and thinking that he was going to challenge her for valedictorian.

"But it was a friendly competition and I thank Daniel for pushing me," she said.

Honani recounted a class trip to the zoo.

"It's where some got their first kiss, from a giraffe," she said.

Honani said she has seen parents who don't give up during tough times.

"They have been my motivation," she said. "Determination is important because that's what gets you to your dreams."

She told her classmates to stay happy and humble.

"It's an honor to be your principal," she said. "I applaud the students. They all worked hard."

Furgerson said the junior high students were mannerly and intelligent.

"I wish you an enjoyable and safe summer vacation," she said.

Hoitema Talayumptewa started the night off on a positive note. Before he gave the invocation he asked everybody if they were enjoying the evening and told them it was honor to be there. Hopi High's Junior ROTC posted the colors and Lorissa Pooyouma and Ke'Andre David sang the national anthem.

Amber Labahe and Jihad Nodman served as masters of ceremony. Labahe thanked all her teachers before the dynamic duo introduced the keynote speakers.