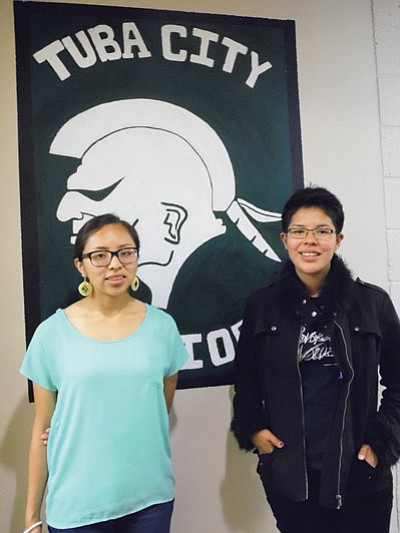 TUBA CITY, Ariz. - Students all over the country are graduating this month and at each school two students graduate with the highest academic marks and are selected as the valedictorian and salutatorian of their class.

At Tuba City High School those students are Valedictorian Darshina Yazzie and Salutatorian Kyra Kaya. The two will deliver their farewell remarks to their student peers, family and community members May 23 at Tuba City High Warrior Pavilion during this year's 2015 graduation ceremony.

Yazzie, an enrolled member of the Navajo Nation, is the daughter of Bertina and Randall Norcross. Born in Tuba City, Yazzie lives in the nearby community of Cow Springs. Of the Black Streak clan born for Bitterwater, Yazzie has chosen engineering as her academic field of study.

Yazzie won a full academic scholarship to Dartmouth. During the past several summers Yazzie attended Phillips Exeter Academy programs and graduated from that exclusive summer intern program. She has also taken extensive honors program classes at Tuba City High School. Yazzie is also a Chief Manuelito Scholar and a member of the Native National Honor Society and National Honor Society.

Yazzie credits her father for playing a supportive role in her education and, along with her mother, is a model for her college pursuits. Also being the eldest of six children has fueled Yazzie's thirst for higher academic accomplishment to serve as the oldest role model for her younger family members.

When asked what advice she would give to others at Tuba City High School about academic success she said to stay focused.

"Be really persistent, ask questions and make sure you turn in all your work assignments on time and in an organized order," Yazzie said.

Kaya is also an enrolled member of the Navajo Nation. She is from the Kinyaa'anni nishi clan, born for Tabaaha bashishchiin clan and was born and raised in Tuba City.

Kaya has not declared a major yet, but she has been accepted to Coconino Community College in Flagstaff this fall. Kaya is also a member of the National Native Honor Society.

Kaya finished right behind Yazzie in final GPA ranking at Tuba City High and didn't name a final mentor for her academic inspiration but said Sarah Paulson is her life goal mentor.

As for advice to her fellow Tuba City High School classmates?

"Do not procrastinate," she said.