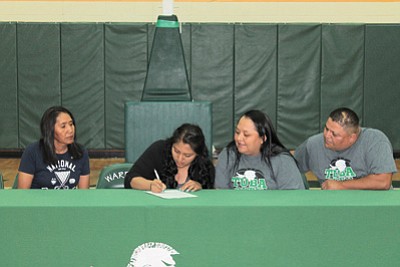 Tuba City High School senior Samytha Parrish signs a full ride scholarship to Chandler GIlbert Community College to play both basketball and volleyball while earning a degree in biology. Parrish is flanked by her coach Kim Williams (left) and her parents, Gwenytha and Sam Parrish of Tuba City. Photo/Rosanda Suetopka

Parrish, an enrolled member of the Navajo Nation from the Bitter Water and Reed People clans, paternal Red Running to the Water and Towering House clans, was born in Counsler, New Mexico but made Tuba City her home during her formative years.

The first in her family to sign a college contract, Parrish has shown sports promise during her Tuba City High School career and garnered attention from Chandler Gilbert Community College to play in the school's state recognized women's sports programs.

Parrish said her great-grandmother inspired her, telling her "set a goal and then achieve it." Parrish said she the sports programs are Tuba City High "are really great, I have learned so much in the past four years there."

Chandler Gilbert Community College was founded in 1985 and has since expanded from its original campus in Chandler to two other communities, which serve more than 19,000 students annually at all three campuses.

The school offers a wide variety of degrees and certification in a variety of fields, university transfers and workforce development and continuing education.

Parrish had only positive things to say about her years in the Tuba City District and wanted to express her appreciation for her parents for their continued support for her academic and sports interests, her grandmother and her immediate family. She thanks her coaches Harrison Miles, Harlan Barlow, Brandi Atene, Kimberly Williams and Roger Tsingine. She also thanks Athletic Director Jamie Roe and his staff for their support.