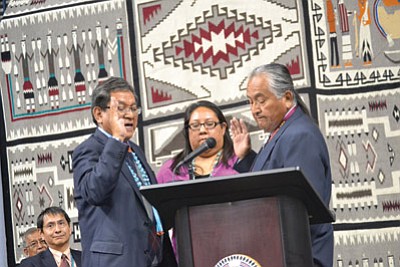 WINDOW ROCK, Ariz. - Contrary to reports in the media, Navajo Nation President Russell Begaye does not support the Grand Canyon Escalade project, a fact that his administration made clear the day after he and vice president Jonathan Nez took office May 12.

On stage, before a full crowd at the Bee Hółdzil Fighting Scouts Events Center in Fort Defiance, Arizona, Begaye signed a list of priorities that former President Ben Shelly presented to him. Among other things, on that list was the development of the Grand Canyon Escalade project - a fact that was quickly picked up in the media.

The Begaye-Nez administration responded quickly and said Begaye signed what was "a historic and symbolic gesture of Ahil na' anish, a smooth transition and an agreement in principle as a new administration took office." Begaye said the administration would evaluate each project on whether it is in the best interest of the Navajo Nation and its people.

During speeches at the inauguration, Begaye and Nez struck notes of sovereignty - they call it "Awakening a New Dawn - a change in consciousness for the Navajo people.

Nez said social ills, like substance abuse, greed and poverty are "monsters" that can cause ill will and also believe in the status quo. He said the solutions to those ills are leaders and relatives who care.

"They are our loving mothers, fathers, grandmothers, grandfathers, aunts, uncles and siblings," Nez said. "They are the people who stand by us through joyous occasions and the most challenging ones."

Begaye said the Nation is coming to a crossroad and the people must decide which route to follow - one they have already traveled or the awakening of a new dawn where the Navajo people are no longer ashamed to speak their language from birth to adulthood. Where the language has value in every aspect of livelihood - from home to schools to places of employment.

Begaye also said the Navajo people need to stop looking off the reservation to supply the Nation with things that they use for work and home life - that those things can be supplied by the Nation for themselves, including food that will sustain the Nation and be free of products that have brought disease to the Nation, like diabetes. He said the Nation needs to have full authority over natural resources, water and the prosecution of non-Indians on Navajo land.

"We can make the things we need on our Nation," he said. "We can keep our money here. For too long... we have taken our best and brightest to ...other cities in the United States and their expertise, brains and skills are being utilized in those places... it is time we bring them back. Our people are talented, they are smart and we can do whatever we put our minds to."

The new president and vice president also visited the studios of KTNN AM 660, "The Voice of the Navajo Nation" to announce cabinet appointments and to discuss the agreement signed during the presidential inauguration May 12.

"Thank you for your prayers and support. We are very appreciative," Begaye said.

Nez introduced himself and said, "Thank you to everyone who joined and watched our inauguration. I want to congratulate the new Navajo Board of Elections Supervisors."

In contrast to the previous administration, there will be no separation of duties and responsibilities between the president and vice president. Instead, Begaye and Nez will work together to make decisions in the best interest of the Navajo people.

Taking turns to speak and share their message during the KTNN broadcast, the new leaders of the Navajo Nation displayed a teamwork approach.

The administration will work on many different projects and will take a look at the agreement that was presented by the previous administration during the inauguration.

The agreement signed during the inauguration was done in the spirit of cooperation and transitioning to the "Awakening of a New Dawn" for the Navajo people.

"We will review these projects and see if they are worthwhile initiatives to pursue," Begaye said. "It's important to understand they were the priorities of the previous administration. Our administration is advancing good, worthwhile projects."

Nez said the administration plans to continue broadcasting weekly to report on news from the executive branch.

Nez said that he and Begaye visited students from Navajo Head Start and they appreciate the invitations to speak at different schools.

"They [Navajo Head Start] speak Navajo very well and it was impressive," Nez said. "Congratulations to our promotees and graduates of 2015. Reach for the stars. Thank you to the parents, grandparents, uncles and aunts for encouraging our kids."

As the cabinet appointments indicate, the administration is bringing home skilled and educated Navajos, a message they spoke of throughout their campaign.

"We want to open the door back up to you to build our Navajo Nation. God bless," Nez said.

"It's the 'Awakening of a New Dawn,'" Begaye said. "We'll move our Nation forward with K'e and Hozho'. We need your prayers. Thank you and God bless you all."