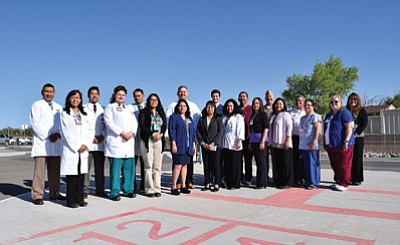 ACS has only verified one other Native American Level III trauma center. That one is located in Anchorage, Alaska.. The designation moves TCRHCC up a ranking.

Four and a half years ago when Dr. Ralph Zane Kelley, a trauma surgeon and also the chief of surgery and trauma medical director at TCRHCC, arrived he said the hospital was designated by the state of Arizona as a level IV trauma center. The designation by ACS is a national ranking.

The American College of Surgeons is a scientific and educational organization of surgeons that was founded in 1913 to raise the standards of surgical practice and improve the quality of care for surgical patients. ACS is dedicated to the ethical and competent practice of surgery, according to its website.

In a recent statement, ACS emphasized that the allocation of trauma centers should be based on the needs of the population, rather than the needs of individual health care organizations or hospital groups. And, at their core, trauma systems are developed to achieve care that is optimal for injured patients.

In the state of Arizona there were only 11 verified Level III ACS trauma centers. Tuba City is now number 12 on that list. By comparison, Flagstaff Medical Center is a Level I.

"The others are ... big names that you don't normally see Tuba City on that list with," Kelley said.

He said the designation is a big deal across Indian country because of the amount of trauma on reservations, which has been verified by studies.

In trauma terms, Tuba City sees everything from car crashes, ATV accidents, assault, gunshot and knife stab wounds, patients who were bucked off a horse, gored by a bull and elderly patients falling.

"We even see a number of trauma's that are from international tourists at Monument Valley or Grand Canyon," Kelley said. "The majority are native traumas."

Shannon Johnson, RN director of trauma program services, and Kelley worked the last few years for the current Level III designation with an initial visit by ACS in 2013 and the final visit coming a year and a half later. ACS specifically looks at the trauma patients an emergency department cares for - whether they are cared for or operated on at the hospital or whether they are shipped somewhere else. The organization also looks at how the ER department tracks care of patients, how they do peer reviews of all trauma patients, how the surgeons receive trauma credentials, and the equipment and infrastructure each hospital has.

Even with the new designation, TCRHCC still has limitations on head and spine injuries - those patients are still treated in Flagstaff or Phoenix.

In addition to providing a higher quality of care, trauma surgeons and orthopedic surgeons are on call 24-7, the trauma process is tracked so it is up to the standard that ACS sets for trauma centers.

"It definitely increases the quality and competency of care that trauma patients receive here," Kelley said. "Tuba City is probably the only place on the rez that has ER residency trained board certified ER physicians. Also we have general surgeons who are advanced trauma trained."

One of the biggest things that Johnson and Kelley want people in the region to know is that the designation means something because it is one of a limited number in the state and only the second Native American hospital to be designated.

"We're accredited by a national organization and we do care for a high level of patients and definitely care for and have a higher acuity of care than the majority of other reservation facilities," Kelly said. "Tuba is constantly adding new services and new specialties to keep patients on the reservation rather than having to ship them to Flagstaff or Phoenix where it is an inconvenience for themselves but also their families."