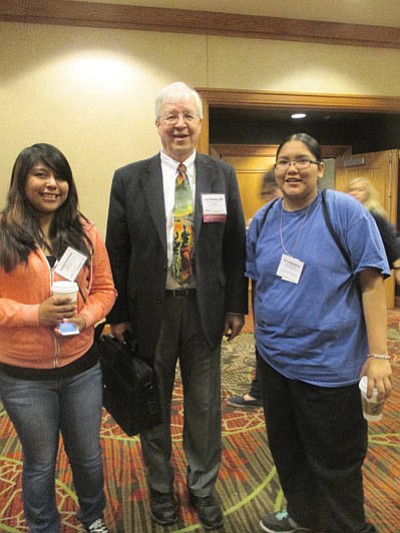 Katrice Puhuhefvya, an advanced radio broadcast student at Hopi High, earned an "Excellent," or the equivalent of a second place award in the print journalism commentary writing category at the national Journalism Education Association (JEA) Conference in Denver April 15-19.

Puhuhefvaya, a junior, said she was shocked to win the national award. She was especially proud to be a Native American and win an important award.

"It was awesome because it proves that Native Americans can do awesome things," she said. "I thought the contest would be stressful, but once I was in the zone of writing it was fun."

Puhuhefvaya was glad to see the judge's comments. She received a good rating in every criteria, but the judge wrote that she needs to slightly improve her evidence. She said the award motivates her to do more with media because it shows that her writing is good.

The Hopi High media students attended a video boot camp.  Puhuhefvaya said the boot camp was stressful, but the person she interviewed was amazing. She interviewed DJ Alieshea Francis who performs on the longest running hip hop show in the nation.

Puhuhefvaya's advice for students going to this conference in the future is to have fun, make new friends and when entering a contest, don't be stressed, "just have fun and do your best."

Tierra "Terror" Lomabalaquihoya, a news video and print journalism student, said it was cool learning a lot of new skills at the JEA conference and she also enjoyed meeting a lot of new people.

Lomabalaquihoya said the best part of the conference for her was entering a videography contest. There were only 10 people in her category. For the contest, Terror had to shoot B-roll. B-roll is alternative footage intercut with the main shots of an interview.

She said the contest was fun because they were able to go to opera theaters to shoot their footage.

"I met a cool guy. His name was Ruiz, a senior from Texas. He started in video the same way I did and he's in the same grade. We joked around about the contest and compared it to the Hunger Games because we were all on our own. Although we joked around for a few minutes, he gave me a lot of helpful tips and advice for videography."

Lomabalaquihoya was nervous during her contest because she was the only girl in a group of 10, so she felt odd and out of place.

"I was really tense, but I took a breathe and relaxed," she said.

"I was proud of her. She worked hard all year. She deserved that award. Hats off to her," she said.

Lomabalaquihoya said the conference could have been improved by having more hands-on and fun sessions to give students tips on problems they confront with their media work.

Lomabalaquihoya participated in a video boot camp where she and Hopi High journalism student Jennifer Huma made a video about teen pregnancy.

"The video boot camp was fun, but challenging," she said. "The teacher giving us the assignment could have explained better what he wanted us to do, rather than telling us at the end when we were reviewing the footage."

Lomabalaquihoya said she will prepare for next year's video contests by working on her angles and different types of shots. She plans to purchase a video camera so she can work on it during the summer.

She was glad that Hopi High seemed to be the only reservation school at the conference.

"Being a part of the only Native American group was pretty awesome because it shows that we may come from a small reservation, but we know just as much as city kids do. I have met people who come to Hopi thinking we aren't experienced in media and electronics. They are surprised when they see we have the same devices as them: ipods, iphones, etc.," she said.

Her advice for students going next year would be to have fun, relax and don't be nervous.

"Being nervous will throw your game off, especially during a contest. All the students are in the same boat as you -They are just there to learn and get advice on what they can do better," she said.

Huma, editor of the Bruin Times, said the JEA conference was fantastic because she learned a lot from others and continues to look forward to learning more to expand her knowledge in journalism.

Huma, a junior, said the best part of the conference was getting to interview students from other schools. However, she also enjoyed sitting in on sessions to get more in-depth knowledge about media. She said there could have been better organization about where the rooms were for the sessions.

She said it was nice being the only Native American group at the conference.

"Not many Native Americans have an interest in the journalism field and for people to know that we were representing Hopi Jr./Sr. High School as Native American journalists was... words can't explain, but I'm just happy we all had the chance to share what we know with others," she said.

Her favorite session was about icebreakers where the teacher told the students to draw pigs and the way they drew the pigs told them something about their personalities. Jessica Young, an advisor at Orange Glen High School in Escondido, California, led the session.

Huma entered the review-writing contest. Everyone competing in this category heard a band and had to write a review about them.

"They were so loud they gave me a headache," she said. "The contest was nerve racking but I stayed motivated the entire time and did my best. I'm so happy that Katrice won her award. I'm proud of her and the others for giving it all they've got."

Huma said next time she can improve by concentrating more and being more prepared because she didn't expect to be around so many students, advisors and judges. She said that part of the conference was overwhelming.

Huma said the video boot camp was difficult for her, but it was fun working with the camera to learn tips and techniques about making a great video. She said it was great meeting video teacher Michael Hernandez and Karen Kazarian, a video advisor for a Nevada school.

Her advice for students attending the conference in the future is be prepared and don't be afraid to share what you know.

"It's important to be connected with others so you learn more and gain the information you need," she said.

Huma observed that there were many homeless people in downtown Denver.

"Even though they don't have anybody to go to, some of them still have the motivation to pick themselves back up and be a better person," she said,

Kristen Russell, an advanced radio broadcast student at Hopi High School, said the JEA conference was great. At first, she thought the conference would be full of journalism nerds, but found that it was helpful getting tips from students from other schools and the presenters of various sessions.

Russell, a junior, said the best part of the conference was interacting with students from other schools and gaining knowledge about all types of journalism, especially learning new techniques from the sessions. She was impressed with the conference because she felt everything ran smoothly and was impressive.

Russell had two favorite sessions. One about addressing campus sexual violence and another on photography. The two hour sexual violence session was led by panelists Amy Pohl from the Colorado Coalition Against Domestic Violence; Sara Gregory from the Student Law Press Center; and Elizabeth Gray from Columbia, South Carolina.

"I have a dream that one day I'll be able to take pictures of new places and be a part of the culture. I feel that photography will be a unique way to express myself and that is all I want to do," she said.

"The contest was completely terrifying. It was nerve racking having to present my work to be judged," she said. "Nobody wants to be judged, especially if it's something your passionate about."

Russell said during the contest she thought too much about failing, which caused her to over-think her poem. She said if she has this chance again that she will take it, believe in herself and know that she won't always succeed, but learn from the experience.

Russell said she was excited about Puhuhefvaya winning her award.

"It took me awhile to understand the situation and when I saw her name on the Jumbotron, I immediately got happy. Overall, I was just so excited that she won, when I doubted all of us who went," she said.

She said the video boot camp experience was great, but since she's not in video she didn't know what she was doing and it was frustrating.

Russell found that being with the only Native American group at the conference was intimidating because of stereotypes.

"Beyond that, I think it shows that there are very few Native American schools that give their students the opportunity to expand the students' minds to the variety of career options they have," she said. "I am proud that Hopi High has given me this opportunity."

Russell said the conference motivates her to do more as she may transfer from advanced radio to print journalism. Her advice to students going to the conference in the future is "flaunt what you know, don't be scared to ask questions. Be open minded to doing new things and overall just look forward to new opportunities."