Winslow Bulldogs baseball 6-6 for the season after losses against Flagstaff, win against Hopi 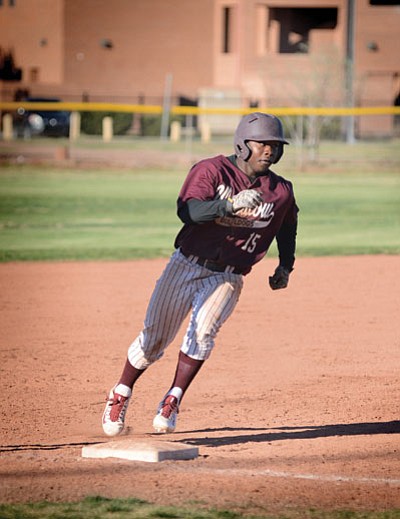 Darrien Brown crosses third base on his way to score. Photo/Todd Roth

WINSLOW, Ariz. - The Winslow High School Bulldogs baseball team lost a pair of games to the Flagstaff Eagles 16-1 in Winslow March 12 and 7-2 in Flagstaff March 14. On Tuesday, March 17 the Bulldogs defeated the Hopi Bruins 18-0 at Polacca. The next day, the Bulldogs journeyed to Camp Verde and lost 3-0 to the Camp Verde Cowboys. The results left the Bulldogs with an even 6-6 record for the season.

The first game against Flagstaff, a 16-1 loss, was one in which the Bulldogs were plagued with errors and walks and probably never had much hope of a victory. The second game with the Eagles was a 7-2 loss but one in which Winslow scored first in the top of the first inning and led until the Eagles scored five runs in the bottom of the third inning to take a 5-2 lead. Flagstaff added its final two runs in the bottom of the fifth inning.

Matt Ramos took the loss giving up seven runs on eight hits, five of which were earned. He walked four and struck out four. Kuster Kinlicheenie worked an inning in relief and allowed only one hit. The Bulldogs had four hits. Kevin Brown, Kinlicheenie and Junior Villanueva were one for three with Brown having a triple and Villanueva a double. Rey Chavez-Velez was one for four.

In the 18-0 win over Hopi, Villanueva got the win working three innings and not allowing a hit or a run while walking two and striking out seven. Chance Dick worked the final inning of the shortened game and allowed two walks while striking out two. Winslow had 15 hits led by K. C. Clay and Chavez-Velez who were three for three with Clay having two doubles and a home run and Chavez-Velez a triple. Villanueva was two for three with a triple. Nick Marquez was one for one. Chance and Kinlicheenie were one for two with Kinlicheenie having a triple. Marcus Monroe was one for four.

In the 3-0 loss to Camp Verde, Ramos worked four scoreless innings and did not allow a hit or a run while fanning four and walking two. Kinlicheenie lost for the first time this season in relief giving up three runs, only one of which was earned, on two hits. Winslow outhit the Cowboys seven to two but left nine runners on base. Chavez-Velez was two for four. Clay was one for two. Dick, Marquez and Avelar were one for three. Kinlicheenie was one for four.