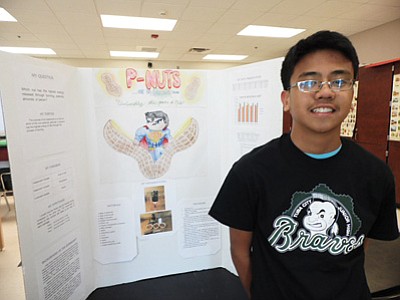 TUBA CITY, Ariz. - The Department of Dine' Education and the Offices of Dine' Science, Math and Technology recently put on the 2015 Navajo Nation Science Fair at Red Rock State Park in Gallup, New Mexico. Students from 245 reservation schools competed for prizes like LeapPad Ultras, Kindle Fires or FireFox tablets as well as medals and certificates and the chance to represent their schools at the state level.

Students were divided into four categories, including Pee Wee Division, which is K-4th grade level, grades 5-6 and 7-8 junior high and the 9-12 senior level.

This year's theme was "Got Science?" The theme was emblazoned on banners and T-shirts that were given to all final competitors. Students also had the opportunity to mingle with students from all over the reservation during the three-day competition, giving them a chance to share their science and technology interests and even spend some time making new friends.

Ezekiel Macaraig, age 12 from Tuba City, the son of Vilma and Jonathan Macaraig, has lived in Tuba City for the past six years and his winning entry was titled "Peanuts: P for Power."

Macaraig tested the energy of legumes, which included pecans, peanuts and almonds. In the earth science category, he found that pecans hold the highest amount of British Thermal Units (BTUs). Macaraig said his parents really supported him and that he "learned a lot about project presentation" through the public competition at Red Rock Park.

Ruthie Miranda, a seventh grade student and daughter of Leticia Poleahla and step-dad Justin Fritz, took home a 5th place win with her entry of "What Surface Does a Turtle Move the Fastest on?"

Miranda said she was nervous but that it was also fun to prepare for her entry at the science fair. She said the judges asked a lot of good questions and made her think more about her entry and what she could do next year for her science project.

Junior High teacher James Hanlon said he is proud of his students' ambition and willingness to take on such heavy competition in Gallup. He feels confident that his students learned from their projects and saw how exciting and interesting science can be. Hopefully, he said, this will inspire them all to seek out solutions or answers to their own science questions in their future careers.