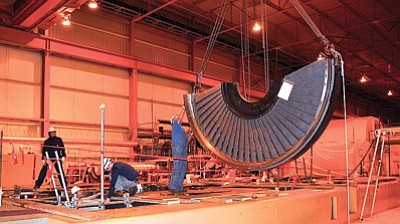 Plant Mechanic Jimmy Begay, who has worked at Navajo Generating Station for 37 years, works on the re-assembly of one of the 88 massive diaphragm halves, the heart of the Unit 3 Turbine. Photo/George Hardeen

LECHEE, Ariz. - Lonnie Begay of Coalmine Mesa said his job as a millwright foreman takes him all over. But returning to the Navajo Generating Station for its annual overhaul feels as much like a homecoming as a job.

"When you come here it's almost like a reunion," the veteran of 13 consecutive NGS overhauls said. "You know a lot of people that work here almost like family. You get to spend some time close to home, and the pay is pretty decent."

Among them are hundreds of highly skilled Navajo craftsmen and craftswomen who travel the country from power plant to power plant, said Brian Mabey, who is in charge of planning and coordinating NGS overhauls.

"Through the years, many have said they look forward to this time to spend two months with their families while earning high wages," Mabey said. "In recent overhauls, as much as 98 percent of temporary workers are Navajo."

Begay said his crew's job on this year's overhaul is to inspect and repair the huge feeders that deliver coal to massive pulverizers that crush coal to the consistency of baby powder.

"Every year we need to repair bearings, replace belts and pans and rollers," he said. "(The overhaul has) been going pretty good for us, which it usually does."

In a major overhaul, the entire turbine and generator are completely disassembled, inspected, repaired where needed and reassembled to specification. The boiler, boiler feed pumps, auxiliary turbines, precipitator and many dozens of other pieces of equipment are torn down to their essential components and rebuilt like new again.

All of a unit's instrumentation is recalibrated to ensure accuracy and precision. All ducts, fans, pumps, steam lines and valves are inspected and repaired to last until the next overhaul.

"The commitment to and investment in this kind of quality maintenance by NGS's owners and managers are what has given the plant its long, productive and efficient life," said NGS Plant Manager Robert Talbot. "It is the primary reason NGS runs better, cleaner, more efficiently and more dependably today than ever."

A key to a successful overhaul is experience and know-how, particularly when thousands of parts are disassembled. Jimmy Begay from near First Windmill in Coppermine Chapter is a plant mechanic who has worked at NGS for 37 years.

Today, Jimmy is working on the re-assembly of one of the massive diaphragms within the Unit 3 turbine. In the center of the circular diaphragms are turbine rotors that spin at 3,600 revolutions per minute. These turn another 48-foot-long rotor within the generator, nicknamed "the pickle," to create electricity.

Jimmy watches carefully as each half of the many diaphragms is gently lowered into place with an overhead hoist.

Is this a difficult job?

"Not if you've been doing it for several years," he says. He's done it for 10 years.

Millwright Ernest Littlefoot is from Kaibeto. When not working overhauls, he's an Automotive Service Excellence-certified technician with a job in Flagstaff.

"I've been working the overhauls for the last 14 years," Littlefoot said. "Once a year we get out here to make a little bit of pocket change, and we go from there. When we're done here at NGS, we're scheduled to go out to CGS (Coronado Generating Station in St. Johns, Arizona) and we do the same thing, millwright."

NGS produces its 2,250 megawatts of power 24 hours a day. For more than 40 years, all of its equipment and parts that make its three generating units work in synchrony have been inspected and repaired through these annual scheduled outages.

"NGS recently received high national rankings for 2013 for both our annual power production and reliability," said Paul Ostapuk, NGS environmental and safety manager. "The December 2014 issue of Power Engineering magazine listed NGS sixth in the nation for total power production when compared to all coal-fired power plants in the United States."

Nationally, the power plant was ranked 20th in the nation in reliability with a capacity factor of 86.9 percent, he said.

While the work being done at NGS won't be apparent to most western Navajo and northern Arizona residents, the positive impact on the local economy will be, Talbot said.

"The workers who come to Page will stay in our motels, fuel up at our convenience stores, have their vehicles serviced in our auto shops, spend in our businesses and eat in our restaurants," he said.

"Absolutely," said Bill Zeglin, owner of the popular Dam Bar & Grill in Page. "Just more people coming in the door, more dollars coming in. Our numbers are up from last year, our overall revenue."

Zeglin says businesses like his look forward to the NGS overhauls that precede the annual Lake Powell tourist season.

"Especially when they're major overhauls," he said. "When we hear that there's any overhaul, we're happy about it because we know they bring the out of town people who have to eat out."

Page Mayor Bill Diak said he took the pulse of local businesses himself recently to see how the overhaul has benefitted Page businesses.

"Zapata's (Mexican restaurant) has been up and I can tell that they're overhaul people because they're all male and there's five seated at two or three tables," he said.

Page has just had its best year in terms of tax revenue, and certainly some of that is attributable to NGS overhauls, Diak said.

Walmart, one of Page's largest retailers, has felt a steady bump in business during this overhaul, said store manager Craig Milam. So far, Walmart sales are up 12 percent, he said.

"You definitely are seeing an impact," he said. "I would say that this is because it is a major overhaul."

Walmart is not only benefitting from the overhaul, Milam said, it's contributing to it.

Some of his workers take a leave of absence in order to work the overhaul and then can come back to Walmart when it's completed.

"If it doesn't turn into a job for them at the plant, then they come back to me," he said.