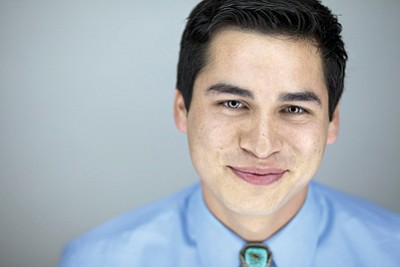 FLAGSTAFF, Ariz. - A Navajo filmmaker, Christopher Nataanii Cegielski, who grew up in Flagstaff, is gaining international attention for a film he created at the University of Arizona's (UofA) film school.

The 11 minute short movie, called "Bloodlines," tells the story of two Native American brothers who live on a small isolated ranch with a very stern father. A rogue wolf begins visiting the ranch and eating their livestock. The two brothers decide to sneak out and hunt the wolf to gain their father's respect.

Cegielski said the film is adapted from another idea that he and his father had, but he ended up making it more relatable to the geography of where he is from, where he was going to school and to his culture.

Before "Bloodlines," he had a tough experience making a short film - inexperience in writing and the reality of making the film with people who didn't necessarily share the same vision made the experience hard but he also credits it with making him better.

"I shot it and worked with a lot of really good people," Cegielski said. "I screened it and started sending it to film festivals, and fortunately I have gotten recognized by a few of them."

He screened the movie in Berlin during Berlinale, the Berlin International Film Festival, one of the world's leading film festivals. The film was featured in the Generations Section, which drew more than 60,000 people, according to a press release from UofA.

He said the experience was surreal.

"Seeing our films in the venues they were shown and being in a theater with people from around the world, from filmmakers to audience members," Cegielski said. "Knowing you came from Arizona and you made that film in Arizona and watching it in that theater in Berlin... I couldn't get over that thought. It all kind of blurred past me and seemed like a dream."

His trip to Berlin was made possible with support from the Sundance Institute, which recently named him a Sundance Film Festival Fellow. Actor and director Robert Redford founded the institute more than 30 years ago.

Through Sundance, Cegielski received one of three Time Warner Fellowships, which provides fellows with mentoring, strategic grants, screenplay readings and in-progress screenings, along with invitations to related programs and events.

Cegielski said that he believe some of the recognition for his film is because it is Native American.

"I think it is a different sort of film than you usually see students make," he said. "It's a coming of age story but it's not a spaghetti western... it's slower, it's methodical, it's a little bit of a different tone and style than you would see in a normal college student film. At least that's what I hoped."

He shot the movie in Benson, Arizona on a ranch provided by the Owens family. Other films shot in that area include Buffalo Soldiers with Danny Glover and Young Guns II. But the ranch has been sold so his short film may be the last shot at that location.

For now, he wants to continue making Native American films, although he also sees himself branching out.

"I think there is a lot of misrepresentation that has happened throughout," he said. "With every Native American culture and every other indigenous culture throughout the world there is a lot of misrepresentation...things that need to be shown that if we as indigenous filmmakers and Native American filmmakers don't do they are just going to be lost."

At the same time, he realizes there are other films he wants to make that will have other subjects too.

Cegielski grew up in Flagstaff, Arizona, and attended high school at Sinagua High School before it became a middle school

He said as a young kid he was always interested in movies. His parents let him see all different kinds of movies.

"What my parents did really well was talk to me about the movies and explain the movies and why things happened the way they did, or the importance of certain things," Cegielski said. "[From there] I got into writing stories and getting into the stories of film. That's kinda where it all started."

Cegielski started at the U of A as a creative writing major. He said he first saw the stories he was writing visually in his head as pictures and he started to want to film those pictures. He eventually switched to UofA's Film and Television program, where he knew he would have access to a hands on program that would help him with the reality of making a film.

And while he wrote scripts in high school he said he was never very serious about it with other high school distractions.

But Cegielski was used to succeeding at most things he did. When he got to film school at UofA, he found more competition.

"For the first time, I was in classes with kids who had not been doing this for a year or two but for three or four and they've been working hard and harnessing their craft and they knew what they were doing," Cegielski said. "I would see some of the stuff that they would make and it would just blow my mind away."

Cegielski said filmmaking is a hard process and a group effort.

"I am just very fortunate through this process that I've had so many people who have been willing to help me out and lend a hand whether it was through funding or my cast and crew," he said. "Even with just the little things, I've always felt very fortunate to be where I am and to have all the help that I've received."

Cegielski now lives in Los Angeles, California where he is working on another short film and hopes to build momentum to work toward making a feature film.