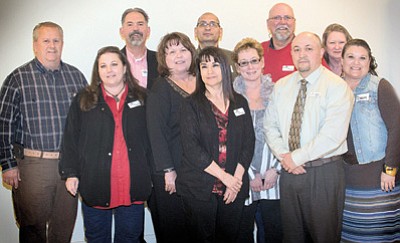 WINSLOW, Ariz. - At a March 12 dinner, the Winslow Chamber of Commerce installed the new Board of Directors.

The board will take the reins until March 2016 when a new board will be installed. Twelve board members serve for a term of three years and every year four member are termed out and four new members are elected.

During December of the previous year members at large are solicited to appear on the ballot. Ballots go out to all members in January. Members vote for four new members who are installed at the March dinner.

The four new Board members this year are Sylvia Hartnet, Mark Strango, Berry Larson and Darcey Mckee. The nine remaining board members for this year are Dan Simmons-President, Devin Singh-Vice President, Theresa Warren-Secretary Treasurer, john Dalton, Beth Carlson, Frank Guzman, Loraine Gonzales, Tom McCauley. The CEO for the Chamber of Commerce is Bob Hall and his assistant is Angela Gonzalez.