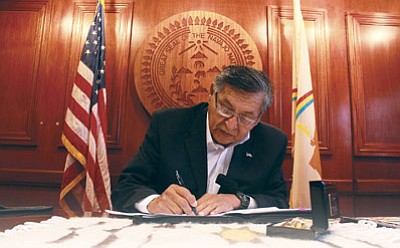 WINDOW ROCK, Ariz. - The timeline for the Navajo Nation presidential election is again in question after the Navajo Nation Council voted 12-8 to hold a public referendum to allow the Navajo people to determine language fluency qualifications for the positions of president and vice president.

Shelly urged the Navajo Nation Council and the Navajo Election Administration (NEA) to promptly hold a discussion to establish a new election timeline.

Last Friday, the Navajo Nation Council approved $317,891 for the NEA to fund the 2014 general election that was scheduled to take place April 21. Council Delegate Leonard Tsosie amended the legislation by proposing that the money go toward a referendum before the scheduled general election.

Shelly maintained that the decision to amend the Navajo language fluency requirements for the election code lies in the hands of the people.

"I maintain that the Navajo people are the governing authority," Shelly said.

Council Delegate Dwight Witherspoon asked his colleagues to support the original legislation to bring an end to the divisiveness created by the fluency issue.

But during the discussion, Tsosie (Baca/Prewitt, Casamero Lake, Counselor, Littlewater, Ojo Encino, Pueblo Pintado, Torreon, Whitehorse Lake) proposed an amendment calling for the money to be used to hold a referendum prior to the election.

"This appropriation shall first be used to have the Navajo voters vote on the referendum question to modify [the Navajo Nation Code] (which outlines qualifications for the office of the president and vice president)," the amendment stated.

In addition, the amendment calls for a special session to take place to address the presidential election following the certification of the referendum vote by the Navajo Election Administration.

Witherspoon said the amended language would change the intent of the original legislation.

Prior to the final vote, Tsosie called for an increase in support for language immersion programs and said the legislation would give authority back to the people to decide the issue.

"The people are the best decision makers on a tough issue like this," Tsosie said. "What we've done is given the authority back to the people."

The general election will also fill six positions for the Navajo Nation Board of Election Supervisors (NBOES) that are empty after the people in those positions were held in contempt of court by the chief justice for refusing to remove Chris Deschene from the ballot and replace his name with third place primary finisher Russell Begaye.

Edison Wauneka, director of the Navajo Nation Election Administration, said that April was the earliest an election could take place and still meet the filing and certification requirements for the vacant board positions.

The Supreme Court ordered the NEA Feb. 20 to hold an immediate general election at the same time that they invalidated two council resolutions from December that had called for a special primary and general election to be held in June and August with all 17 primary finishers, including Deschene who was ultimately disqualified for failing to answer questions in Navajo before the Office of Hearings and Appeals. The resolution also called for a pardon for the election supervisors who were held in contempt.

The NEA also issued a notice Feb. 23 to inform the public of filing extensions for three of the vacant NBOES positions for the Chinle Agency, Eastern Agency and the Western Agency. The filing period for the three positions closes on March 9 at 5 p.m. Candidate applications may be filed at the agency sub-offices of the NEA.

The election timeline as it is scheduled now (before the referendum vote) follows:

• May 4: certification of election results

• May 12: oath of office for the Office of the President and Vice President