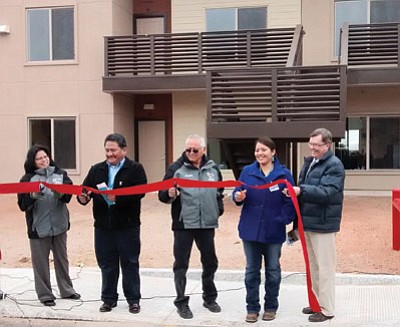 TUBA CITY, Ariz. - On Jan. 29, Tuba City Regional Health Care Corporation celebrated a grand opening of the Pasture Canyon Apartments. The 36-unit complex is located off of East Drive, north of the Tuba City High School campus. These are one and two bedroom apartments for hospital employees

Housing is desperately needed to retain and recruit employees, some of whom have to commute from Flagstaff or live in one of the local hotels.

"We have been waiting a long time for this to happen," said CEO Lynette Bonar. "The budget sequestration put the project behind. This has been four years in the making and we hope to add more apartments when funds become available."

Hospital Board member Tincer Nez spoke to the crowd in attendance and expressed his appreciation for the completion of the project.

"I am glad this completed project will keep staff closer to their jobs," Nez said. "I have had jobs far from home, so I am glad employees will have more time with their families by being able to live closer to work. At one time the staff was only 500, now TCRHCC has over 1000 employees. This will help contribute to the economy of Tuba City and I look forward to expanding more housing for the staff."

According to Facilities Director Julius Young II, the Pasture Canyon Apartments is the result of facility management working closely with the architects. The goal was to finish construction within two to three years. He was happy to have the opportunity to be a part of the project and to work with Brycon, the construction company. People will start moving into the units soon with a number of the 36 units already assigned.

Representatives from Brycon Construction and SPS Architects said that it was a pleasure to be a part of the project. Almost all of the construction crew was hired in the area.