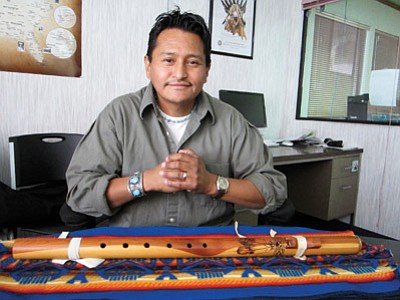 Above and below: Jonah Littlesunday recently traveled to Los Angeles to audition for the America’s Got Talent television show. Katherine Locke/NHO

FLAGSTAFF, Ariz. - If it hadn't been for his coworkers at Sprouts, who are mostly Northern Arizona University students, Jonah Littlesunday, a Navajo flute player, would never have gotten the chance to perform for America's Got Talent in Los Angeles.

Littlesunday has gone through tough times. He lost his job last year. He came close to losing his house. He is still not sure whether he can keep it. His wife's car was repossessed. The family got on food stamps.

"It was very hard," Littlesundsay said. "No way to pay for this trip. I decided I wasn't going to go."

But, a video he posted to YouTube changed his life. After a coworker saw the video of Littlesunday playing flute, he shared it with others at Sprouts, including Littlesunday's boss. Out of that effort a Facebook campaign was born to raise the money for Littlesunday to go to LA for the America's Got Talent show.

"I've never really gotten to thank the NAU students because it was the NAU students who caused this Facebook campaign and media frenzy to spread the word," Littlesunday said. "Being on the receiving end, I couldn't believe it."

What really strikes Littlesunday is the generosity of college kids who were just as broke as he was. It is not something he takes lightly or is likely to forget.

"I owe, me and my wife we talked about it, we owe the NAU students... we owe them this whole opportunity," Littlesunday said. "They did this for me. They didn't have to do it. They're just great kids and obviously they came from great families."

Littlesunday said as a result of the students' campaign he had a family come in from Page to give him $40 and to shake his hand. It is those kind of moments that stick with Littlesunday now.

"You struggle for so long," he said. "You get used to the hardships and then someone comes along and does something like this. It becomes very overwhelming. Out of everything I owe the NAU kids and my coworkers at Sprouts. They did this."

They weren't alone either. Flagstaff Junior Academy and Kinsey Elementary, among others, provided financial and emotional support for Littlesunday. Former teachers have visited him at Sprouts as have Navajo, Hopi and Apache tribal members to wish him good luck.

Littlesunday picked up the flute when he was 14 years old. The Jones Benally family offered him the opportunity to play his flute at pow wows and schools. They stood by him even when he quit playing when his mother died when he was 19 in 1997. He never played again until a few years ago.

While Littlesunday can't say whether he made it on the show or not at this point, he said the whole experience was something he had never experienced before. Littlesunday is originally from Tuba City. He rode a bus from there to Flagstaff to attend Mount Elden Middle School and Coconino High School.

"I am Flagstaff, I am the rez," Littlesunday said.

Some people worried that he would not be able to handle a city like LA because it was so far outside of his experience. He encountered people on the street in LA who offered him drugs. He had never seen a skyscraper or a prostitute.

"It was funny. I had never been exposed to that," Littlesunday said. "The people down there and my father in law put a protective blanket around me."

The experience also exposed his nerves.

"The talent, oh my god," Littlesunday said, describing a child magician who was phenomenal, acrobats and singers. "I heard a little girl sing and it was like listening to Celine Dion or something. I was so intimidated I completely lost all hope. I was like, 'I can't compare.' This is just a native flute."

To calm himself down he went into a quiet open hallway to tune his flutes and started practicing. When he turned around, a huge crowd was listening and applauding him.

He will know by the end of April if he has moved on to the live auditions.

"If I get the opportunity to move forward I would like to save my house," Littlesunday said. "Out of all of this, I would like to say in bold letters to the NAU kids, 'Thank you.' They will forever be a part of my family."