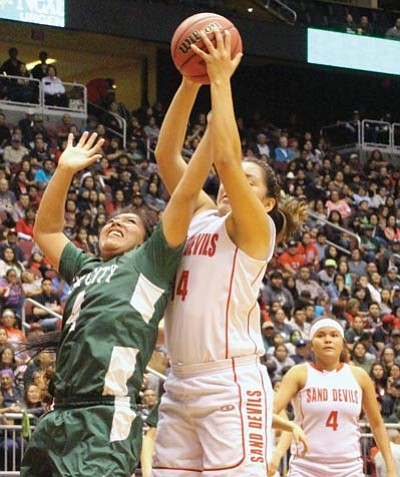 GLENDALE, Ariz. - The Page Lady Sand Devils (35-1) were victors over the Tuba City Lady Warriors (24-10), for the sixth time this season, this time for the Division III girls basketball state title. Page won the game 54-42.

"It feels better - it's great," said Page head coach Justin Smith, "They deserve it, and they have a state title because of their hard work. Defense wins championships. We clamped down and played defense."

"We have a great team. We are blessed," she said,

Sloan converted on seven of 10 free throws in the final minutes of the fourth quarter when Page ran a spread offense and Sloan continued to drive to the paint.

Page came out strong with a 13-0 lead to start the opening quarter. Tuba City was scoreless for the first four minutes and 45 seconds of the game. Page led 19-8 when the quarter ended.

The Lady Warriors outscored the Lady Sand Devils 21 to 2 in the second quarter and led 29 - 21 going into the intermission break. Tsingine led the Warriors come back with 14 points in the quarter.

At the break, Smith asked the team, "Who is the better team?"

The Lady Sand Devil answered, "We are!"

Page came out of the locker room a different team. Natasha Henry hit a momentum shifting three-pointer from the corner and a 20-foot jumper and quickly cut into the lead, but still trailed 36-34 as the third quarter ended.

"We have to rebound," said Kim Williams, Tuba City head coach. "Winning the battle of the boards is key."

Turnovers were nearly even with 20 for Page and 19 for Tuba City.