Lady Bulldogs knocked out of state tourney in semifinal game 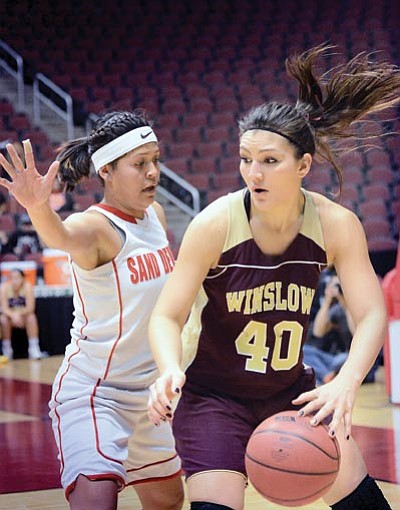 WINSLOW, Ariz. - The Winslow Lady Bulldogs were ousted from the Arizona State III Divisional Tournament by the Page Lady Sand Devils 52-48 Feb. 27 at Gila River Arena. The win sent Page into the championship game on Feb. 28 with a 34-1 record against the winner of a later semifinal game between the Tuba City Lady Warriors and Safford Lady Bulldogs. Winslow wound up with a 28-5 record.

The teams played the first quarter on even terms but Page hit a three-point shot at the buzzer to take an 11-7 lead into the second period. The Lady Sand Devils scored on the opening play of the second quarter to take their largest lead of the game. Winslow was down by a dozen points with five minutes left in the half. Page had a commanding 26-14 lead at the intermission.

Winslow cut into the Page margin in the third quarter but still trailed 40-33 heading into the final period. The Lady Bulldogs quickly cut the lead to five points and got within three with five minutes left in the game. With just over a minute left to play the Lady Bulldogs trailed 49-48. Page hit two free throws to take a 51-48 lead with just seconds left in the game. The Lady Sand Devils added two more free throws and walked off with a 52-48 win.

This was the fourth meeting between the two teams. Page won the season opener at Page 44-33 and a tournament game at Chinle 48-43. Winslow edged the Lady Sand Devils 50-48 at Winslow in the last meeting with Page to give Page its only loss of the regular season.

On Feb. 26 the Lady Bulldogs defeated the Thatcher Lady Eagles 52-36 in the Arizona State Division III Championship Tournament at Gila River Arena. The win improved Winslow's record to 28-4 going into the semifinal game. Thatcher ended its season with a 14-12 record. The win sent Winslow into the semifinals against the Page Lady Sand Devils who beat the Holbrook Lady Roadrunners 64-34 later that day.

The Lady Bulldogs started strong with a pressure defense. Winslow scored the first seven points of the game. The Lady Eagles came back and tallied the next four points. Winslow rallied late in the quarter and led 14-7 going into the second period. Winslow had a 10 point 26-16 lead at the half.

Thatcher started strong in the third quarter and scored the first eight points to cut deeply into Winslow's lead. The Lady Bulldogs did not score until the third period was nearly half over. The first Winslow score of the second half was a four-point play by Armao when she was fouled on a three-point. Winslow finished the quarter strong and had a nine point 38-29 lead going into the final period of play. The Lady Bulldogs continued to pull away to their 52-36 victory.

Armao led all scorers with 20 points for Winslow. Bitsoi was also in double figures for the Lady Bulldogs and Sangster scored eight for the winners. Danica Rowan led Thatcher with 10 points and Cammy Nicholas scored nine for the Lady Eagles.