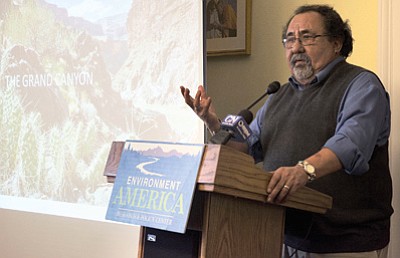 Rep. Raul Grijalva, D-Tucson, said efforts to weaken the Antiquities Act are being driven by ‘’special interest groups with an agenda cloaked in economic recovery and jobs.’’ PhotoKristen Hwang

WASHINGTON - A conservation group held a mock "auction" of the Grand Canyon Feb. 25 to illustrate what they said could happen if Congress strips the president's authority to identify and protect national monuments.

The event came one week after President Barack Obama designated three new national monuments in Colorado, Hawaii and Illinois. The president is also considering such a designation for the 1.7 million acre watershed surrounding the Grand Canyon.

That has led to push back from Republicans in Congress, who have decried the president's authority to "unilaterally designate" land as protected federal property.

"Folks in Congress are pushing hard against the president's ability to even protect these areas, even though more than a dozen presidents over 100 years - Republican and Democrat alike - have used this authority to protect our most pristine natural areas," Environment America spokeswoman Elizabeth Ouzts said of the Antiquities Act.

That 1906 act gives the president authority to restrict the use of public land owned by the federal government, and designate lands as national monuments.

But a bill introduced in January by Rep. Don Young, R-Alaska, would require congressional approval and an environmental review of any proposed national monument. Another bill, from Rep. Raul Labrador, R-Idaho, would require congressional and state approval for national monument designations and restricted use of such monuments.

Environmental activists said stripping the president's authority to protect public land under the act means millions of acres will be "sold off to the highest bidder." At Wednesday's auction, advocates pretending to represent oil, mining and natural gas industries bid on four national monuments including the Grand Canyon and Statue of Liberty. The Grand Canyon sold at $8,000 per acre.

Rep. Raul Grijalva, D-Tucson, spoke at the auction of his "apprehension over what is going to come next."

"Public lands belong to all of us, and as a consequence of that shared ownership and shared responsibility, we can't allow a handful of special interest groups with an agenda cloaked in economic recovery and jobs to dominate the conversation as to what happens to these special places," Grijalva said.

Rep. Paul Gosar, R-Prescott, has long been a critic of the Antiquities Act, introducing bills in each of the last two Congresses that would have prohibited expansion or establishment of national parks or monuments in Arizona without congressional approval.

Arizona has the most national monuments in the U.S. with 18.

"The real intentions of these shortsighted, self-interest groups are clear: They want this designation to prevent energy development, timber harvesting, grazing, mining and different types of recreation on this massive swath of land," Gosar said in a statement last week on the proposed Grand Canyon watershed protection.

Gosar and Rep. Trent Franks, R-Glendale, were two of 25 representatives who wrote Obama last week asking him not to designate the watershed a national monument.

"Arizona is blessed with some of the most beautiful and unique landscapes on Earth," the letter said. "For generations, Arizonans have enjoyed responsible, multiple-use recreation on these public lands, and have been active participants in conserving this amazing public resource."