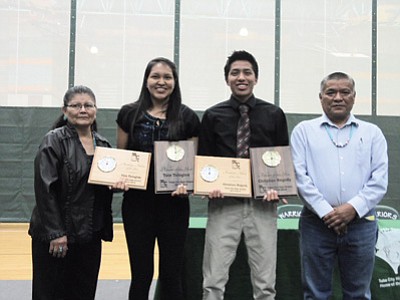 Ten out of the twelve Tuba City High School sports qualified for the 2015 Arizona State high school finals this year.

Wrestling coach Brandon Williams was the Coach of the Year as well.

Tsingine, who recently signed with Central Arizona College (CAC) to play women's basketball, has been the Lady Warriors go to player. At 5 foot 10.5 inches tall, she used her height to reach up and take the ball for key rebounds.

As one of the top players in the state of Arizona, Tsingine is the lone Arizona high school senior CAC recruited this year. Tsingine played in 27 of Tuba City's 33 games. She averaged 17.5 points per game. The Tuba City High Lady Warriors completed their season with a 23-10 record as the Division III State runner up.

Tsingine is a three-time Arizona Republic All State Team member, including first team her junior and senior years. She was named to the Navajo Times All Stars three years in a row. She was selected to All Section and All Division for three years. Maxpreps named her to the All Arizona Academic Team.

Christian Begody, the son of Sophia and Jason Begody of Tuba City, is 18 years old and has a bright future ahead of him in the field of health care. He will attend Grand Canyon University this coming fall.

"Christian is a really bright kid," Brown said. "And his brightness was displayed not just in the classroom but on the basketball court as well. His strategy, his team focused skills, his ability to work with other players. Christian absolutely defines the title of student athlete because he's balanced his academics and his sports so well. He is the most hardworking student I've ever encountered as a coach. The amazing support he receives from his parents and family is really great and with their continued support, Christian will totally succeed as an adult. It's truly been an honor to know this young man and I just wish him the absolute best."

"Most of these student athletes not just succeeded in their chosen sports areas but they are also members of the National Honor Society, and that makes us all so very proud," Longreed said.