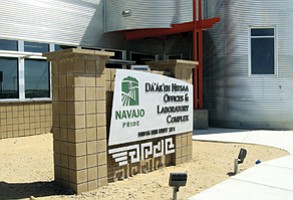 GRAND CANYON, Ariz. - The Navajo Pride label is featured in many restaurants within Grand Canyon National Park, including the El Tovar and Bright Angel restaurants, the Arizona Room and at Maswik Lodge.

Navajo Pride is a brand of agricultural products that are produced by the Navajo Agricultural Products Industry (NAPI) and includes high quality potatoes, corn, beans, barley, wheat, oats and more. NAPI encompasses 75,000 acres of environmentally sensitive farmland located near Farmington, New Mexico and is one of the largest tracts of contiguous farmland in the nation.

Xanterra, a concessionaire at Grand Canyon National Park has partnered with NAPI since September 2014 to bring quality, local products into their restaurants. Recently, staff-members from Grand Canyon Lodges visited the facilities and farm of NAPI.

David Perkins, director of sustainability for Xanterra on the South Rim, said it is a great source of pride to feature the Navajo Pride labels at their restaurants and lodges.

"We are proud to support the Native American agronomists of the Southwest who are providing a great, responsible product, not very far from our own back door," he said. "We value responsible, local agriculture."

One of the reasons for the partnership between Xanterra and NAPI is the legacy NAPI has in conservation efforts and healthy land management as well as the benefits it has for the Navajo Nation's economy.

NAPI started in 1970 as a farming operation that was undertaken on the Navajo Reservation in the Four Corners area where Arizona, New Mexico, Colorado and Utah meet.

The operation started out growing traditional native products and expanded over the course of the past four and a half decades to the 74,000 acre commercial farming operation it is today. The operation supplies commodities to restaurants like the El Tovar along with other dairies, large commercial enterprises including Wal-Mart and food manufacturers like Purina in Flagstaff.

The operation consists of alfalfa fields cut six times per year, field corn for pet food, fields planted in potatoes, beans and wheat, potato warehouses, a bean washing plant, a flour mill, a soils and water lab, a New Mexico State University experimental station, a control room for control and monitoring of dam release flows and irrigation pivots. NAPI also has tractors working on the farm and a demonstration kitchen to teach how to prepare native foods.

"This is a high-tech operation with skilled workers and many excellent agricultural practices that keep the environment in mind," Perkins said.

Some practices at the farm include the hiring process, pest management, conservation and land management, composting and seed stock and training for future leaders among the Navajo people.

Because the farm is on Navajo land, the company has adopted a Navajo hiring preference, giving opportunities to Navajo people for high-paying jobs provided by the company.

If a Navajo person does not qualify, then a temporary non-Navajo employee is brought in to work and train a replacement.

Patrick Beare is one such individual.

Beare has worked under a three-year contract as the sales and marketing manager. A native of Albuquerque, New Mexico and a former Amfac employee, he has extensive experience, which is now imparted to two national sales representatives who are Navajo. One of them, Jeremiah Powless, is working on a Master's Degree from Arizona State University in Sustainability Leadership.

With a gleam in his eye, Powless enthusiastically told the assembled farm managers during the recent visit to NAPI, "Xanterra considers us a local grower, which is really important to us."

Roselyn Yazzie has been working at the farm for decades as a chief operations officer, but with just one glance anyone can see she is a potato farmer who enjoys working the land first, and is an executive second.

Additionally, instead of using pesticides to control the growth of eyes on the potatoes, harvested potatoes are sprayed with clove oil, which inhibits growth.

NAPI has recently seen an increasing demand from such companies as Whole Foods for organic farm products. NAPI indicated they will increase organic offerings in future years, which will decrease the price of such products.

Beare stated that organic farming appears to have a very profitable future, which will help the farm and its workers.

Another aspect NAPI takes into consideration is water conservation. Careful monitoring of soil moisture and weather patterns using sophisticated electronic monitoring helps NAPI to deliver just the right amount of water for the product in its fields.

The Navajo Nation has a generous water allotment under current federal water rights rules; however, officials noted that weather patterns in the Southwest have changed.

"In the last 40 years, not as much rain is falling on the farm (Navajo Nation)," said Tsosie Lewis, chief executive officer of NAPI.

As a result, the latest project is a water reclamation facility currently under construction at the low spot on the farm, which allows farm irrigation water to be collected and re-circulated back to the farm. This process helps save both water and soil nutrients

Additionally, technicians in the soils laboratory collect and analyze soil and water nutrient content to determine exactly the amount and type of fertilizer needed in each field. Crops are rotated with alfalfa, and a dairy hay crop periodically. Alfalfa fixes nitrogen in the soil, restoring important crop nutrients. The farm also contracts with ranchers to bring in beef cattle to graze on the field stubble after alfalfa and field corn are cut.

Seed stock and compost are also important aspects to the farm. Potatoes that fall apart during the harvest are kept as seed stock. Each eye of a potato is a seed to grow more potatoes. In one warehouse, mounds of eyes were observed that will be next year's potato seeds. Other product not suitable for market is shipped to dairy farmers and added to cattle feed.

Additionally, NAPI is in the fledgling stages of exploring renewable energy, including the use of GPS units on tractors to monitor fuel usage, speed and location.

NAPI has many additional benefits for the Navajo Nation, according to Perkins, which includes

Mr. Lewis, a seasoned rancher and farmer who has been with NAPI for four decades shared that when he was a young man, he and another farm worker thought that it would be a good idea to move to more crops that could be sold to commercial entities, however, this turned out to not be a positive move.

According to Perkins, the CEO at the time told Mr. Lewis as he left for vacation, that he did not want to see one potato when he returned. Lewis and his co-worker responded by bringing in 50,000 potatoes and planting the fields. The former CEO did not notice until comments starting coming back from customers about the potatoes.

"I ought, to fire you both right now," Lewis said, recalling the words of his former boss, "But thank you for sticking your neck out."

"All of its potatoes, flour, blue corn pancake mix and pinto beans are Navajo Pride label," Perkins said. The next time you have potatoes or pancakes at the El Tovar or Bright Angel, you can feel good about the source of that food."

According to Perkins NAPI and Xanterra have discussed designating acreage at the NAPI farm for additional agricultural products to be delivered to the Grand Canyon.

"In future years as the farm continues its planned expansion, onions, green chilis and products yet to be determine may come to us under the Navajo Pride label," he said.