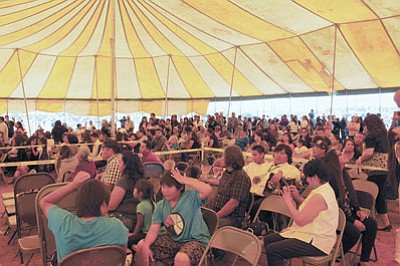 Hundreds of people pack inside a yellow and white striped tent erected at the Navajo Mountain Pioneer Days Event Grounds. Although it was hot, the community and public paid their respect to a Code Talker hero. Photo/Rick Abasta

Hundreds of people gathered inside a striped tent at the Pioneer Days Event Field for the funeral service of Navajo Code Talker Bahe Ketchum, who passed on June 8 in Flagstaff.

Four Navajo Code Talkers were also on hand to honor their brother and comrade in arms. Members of the Navajo-Hopi Honor Riders and a detachment of U.S. Marines from Phoenix joined the Code Talkers to remember Ketchum.

"Today, our nation is mourning over the loss of Bahe Ketchum, one of our national heroes. We extend our heartfelt condolences to his children, friends, relatives and the community of Navajo Mountain," Begaye said.

He said Ketchum was not only a hero and Marine, but also a kind person who served his community and advocated for the next generation, the children.

"Our nation extends gratitude for his service and his work will continue for the years to come and may he rest in peace," Begaye said.

Begaye presented the Ketchum family with the Navajo Nation flag, a framed and signed proclamation for flags across the Nation to be flown at half-staff in honor of Bahe Ketchum, and a framed document explaining the 13 folds of the American flag.

Former chairman and Navajo Code Talker Peter MacDonald Sr. provided the eulogy, recounting the humble background and childhood of Ketchum before he began his service to the country as a Code Talker.

After Ketchum's biological mother passed when he was a toddler, Asdzaa Bi Tlizi Ligaii, Lady with White Goats, raised him.

In his late teens, Ketchum married Hastii Bi Gishii's daughter from the Kaibeto area, but she died giving birth to their daughter when Ketchum served in World War II.

After returning from the war, he married Estella Nez Tsosie, who preceded him in death in 2006. Eight children, 29 grandchildren and 18 great-grandchildren survive Ketchum.

"We're here to honor a Marine, a man of good character, a man who loved deeply and was loved in return," MacDonald said. "He was a Navajo Code Talker, a hero and friend of our family."

Ketchum landed April 1, 1945 on the beaches of Okinawa with the 6th Marine Division. After surviving the Battle of Okinawa, he served in main land China assisting with the surrender of the Japanese at Tsing Tao.

"What he experienced growing up out here in the remote area helped him, I'm sure, to survive the years he was in the military," MacDonald said.

Ketchum's children celebrated their father's gentle spirit that was never harsh in speech or actions. They said he was a man of faith who never hesitated to share his love of God with others.