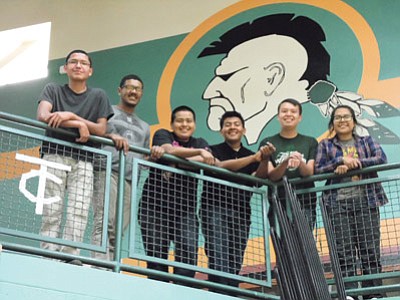 Tristan Begay, Joshua Anderson, Adrian Sixkiller, Chad Barlow, Alonzon Wauneka, Thomasina Dinehdeal and Tressica Johnson are recipients of the coveted Bill and Melinda Gates Foundation scholarship, which they can use to pursue college with financial support coupled with mentorship and academic and social support the entire way.

Bill and Melinda Gates established the scholarship in 1999 for outstanding minority students from low income situations who have shown exceptional academic discipline and promise and have been involved in community service in their hometown.

"Through Bill and Melinda Gate's generous funding and follow up program support, these newest Gates scholarships amplifies the importance of investing in the next generation of extraordinary scholars to support our country's economic strength and competitiveness," Gates Millennium President and CEO Dr. Michael Lomax said. "The extraordinary amount of Gates money, $1.6 billion dollars is granted each year from the GM Foundation to support these exceptional students."

Gates Millennium scholars have high graduation rates with financial support at 87 percent for all students who are awarded.

The Tuba City District Governing Board was extremely pleased to announce the seven Tuba City High School winners for 2015.

"We are deeply honored and proud of the seven students who have competed and shown great academic discipline to have won this special recognition representing Tuba City District," a statement read.