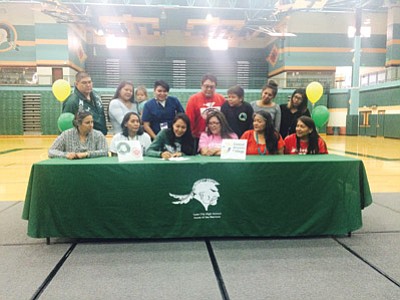 With a massive list of sports and academic accomplishments, Tsingine has signed a letter of intent with Central Arizona College (CAC) to play basketball in the National Junior College Athletic Association, which is located in Coolidge, Arizona.

Each year CAC is a national championship contender at the N JCAA DI level. Tsingine will be joining CAC, which also sends many of their players to the NCAA DI level.

"My decision on attending Central Arizona College was based on the quality of their basketball program and how they can make me a better player," Tsingine said. "My ultimate goal would be to play at the NCAA division I after I go to school at Central. I think the coaches and their program will guide me towards the right steps to reach my final sport goal."

Tsingine has racked up numerous awards in the past two years with this year being the chart topper.

This past year Tsingine played in 27 of Tuba City's 33 games. She averaged 17.5 points per game. She took down 5.9 rebounds per outing. The Tuba City High Lady Warriors completed their final season with a 23-10 overall finishing as the Division III State Runner-up.

On top of all her sports accomplishments, Tsingine also maintained a high GPA throughout high school to also capture the coveted Tuba City Female Academic Athlete of the Year for 2015.

Head volleyball coach Harlan Barlow had much praise for Tsingine,

"I'm so proud of Tate," Barlow said. "I'm really just so proud of what she has done at Tuba City High. She has accomplished so much and she has much more to experience and accomplish at the next level. Tate could've played D1 volleyball out of high school or she could have played at the junior college level, but she chose to play basketball at CAC. I wish her all the best, I know she will make it further down the success road in her basketball career. She has the disciplined work ethic that every coach wants."