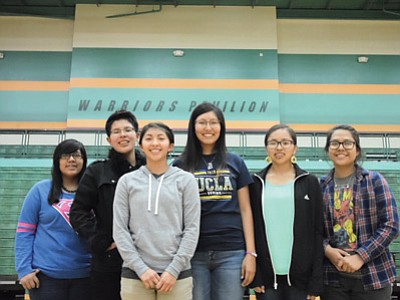 Dukepoo was a biology and science professor and the first Hopi geneticist at NAU who felt that American Indian students should have their own organization of academic excellence that would include only high achieving Native students in the NNHS by encouraging academic excellence as well as intellectual pursuits and high personal conduct standards.

Membership in the NNHS showcases scholastic achievement and discipline and also provides guidance and mentorship into a student's postsecondary academic career.

This is the fourth year Tuba City High School has participated in the NNHS program. Including this year's inductees, the school now has twelve members in NNHS.

Yazzie, age 17 and the daughter of Bertina and Randall Norcross, will attend Dartmouth in the fall to study engineering. Yazzie has been involved in numerous honors programs and credits her father for educational mentorship.

Kyra Kaya, age 17, is the 2015 salutatorian of Tuba City High this year and will attend Coconino Community College in Flagstaff this fall. She has not declared a major yet but hopes her freshman year at CCC will help determine her final education direction.

Deal, age 17 and the daughter of Teresa and Garrett Dinehdeal, is from the Chiishi and Ashiihi clans and was born in Tuba City. Her college career goal is elementary education and she has been accepted to Arizona State University this coming fall. Her academic inspiration comes from her family, who have given her undying support and love so she never felt alone or without encouragement. She also wants to be a positive role model for her younger siblings.

Russell, age 18, is from the Tachii'nii and Todich'ii'nii clans. She will study early childhood education at Pima Community College. Russell said her academic inspiration comes from her mother.

Henderson, age 18, is the daughter of Jennifer and Henry Henderson. She was born and raised in Tuba City. Henderson is from the Water's Edge and Tangle People clans and wants to pursue civil engineering at Northern Arizona University in Flagstaff. Henderson said she took what was best out of Tuba City High and now she hopes that all her high school preparation will assist her in achieving her college goal. She credits her mom for unwavering support and encouragement.

Robbins, age 16, is the daughter of Andrea and Dewayne Robbins Sr. of Tuba City. Robbins is from the Todich'ii'nii and Kiyaa'aanii dahshicheii clans and is interested in the medical field for her career path. Robbins hopes to attend the University of New Mexico, University of Arizona or Stanford and feels that Tuba City High is preparing her for university. Her academic inspiration comes from her teachers and her mother who always told her to make her best effort and do her best. Her teachers at Tuba City High have helped her achieve those goals.