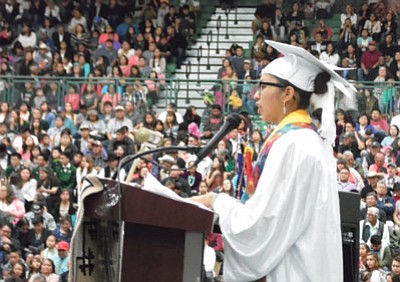 Family, friends, administrators, teachers, godparents, grandparents and even great grandparents all attended to witness the graduates take a new step toward their independent lives, moving on from high school to colleges, universities or vocational training.

2015 Salutatorian Kyra Kaya gave a rousing speech in which she gave many words of encouragement and support to her fellow graduates.

"Believe in yourself," she said. "Embrace your individuality. You should have high expectations of yourself instead of just relying on what others will expect of you."

Tuba City Principal Mary Frances Begaye introduced Dr. Herbert Benally who spoke of the importance of cultural and tribal tradition along with disciplined academics for a successful career for the graduates.

George introduced math teacher Raye Lynn McCabe, the student selected keynote speaker. McCabe was met with hoots and hollars and shouts of "We love you Ms. McCabe!" from the graduating class as she walked to the stage podium.

McCabe is Tuba City born and raised and a former Warrior.

McCabe had much encouragement, pride and words of support for the graduating seniors and shared a bit of her own personal history.

"My grandmother had 15 children," she said. "You had to be really tough to go into labor that many times and I never really understood why my grandmother and mother made the girls in our family wait on our brothers and male cousins in the family. We had to clean, cook and even serve meals to our male counterparts and even clean up after but now I think I understand more about why they made us do that. I think our mother and grandmother wanted us to see that as young people, especially women, we can't just wait around to have people do things for us, that we must learn to work and do things for ourselves."

She said as she grew up, she saw more and more that you really have to rely on yourself.

"I'd like to think that my grandmother would be really proud of me right now." She said. "That I didn't wait for someone to take care of me, I went onto college after high school and worked hard and now I have a job where I can help others learn how to take care of themselves, to learn how to rely on themselves and its really rewarding. I hope this is a lesson you can take away from your high school experience."

Valedictorian Darshina Yazzie also had words of thoughtful encouragement about culture and family for her fellow graduates.

"Remember who you are and where you come from," she said. "We are hopefully going to make a difference for not just ourselves but for our tribal people. In the words of the late Leonard Nimoy of StarTrek fame, 'Live long and Prosper.'"