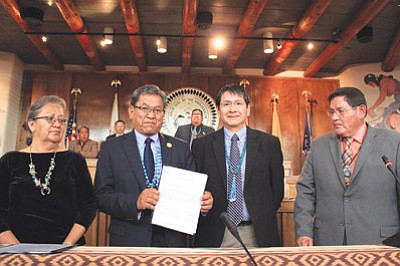 WINDOW ROCK, Ariz. - Before the start of the 2015 summer Council session, the leaders of the three branches of the Navajo tribal government gathered inside the council chamber to sign an agreement outlining the priorities of the Navajo Nation.

"It's historic," said Navajo Nation President Russell Begaye. "This has never happened before. We've been working separately, until now. We never brought our plans together, our priorities, until now."

This is the first time in the history of Navajo Nation governance that an agreement has been reached between the executive, legislative and judicial branches on the priorities and needs of the Navajo people.

"By doing this, we're saying that (the branches) are coming together, that we're going to pursue these objectives and goals together," Begaye said. "We can move the Nation forward by demonstrating that the Navajo Nation government can work together. This is just the beginning."

He thanked the members of the 23rd Navajo Nation Council for the opportunity to meet and share their priorities from the committee level and from the individual delegates. He expressed appreciation to the judicial branch for also sharing their goals and objectives.

Vice President Jonathan Nez thanked the 24 delegates of the Navajo Nation Council. He said that council delegates expressed the concerns of their respective chapters during negotiations of the priority listing. They deserve to be commended for speaking on your behalf, he added.

"The delegates spoke on behalf of their relatives, their chapter people on the challenges they face and those needs were written down on paper. All of (the leaders) will have one plan, that's why we're here today," Nez said.

He said there will now be one voice for the Navajo people, not just on the Navajo Nation, but with the states, the federal government and throughout the world.

"Yes, we talked it over and came to an agreement. From the Judicial Branch we spoke of the need to strengthen our judicial system because that gives us the strength to work for the Navajo people," Shirley said.

She said the money flowing off the Navajo Nation must be stopped and that the branches must work together to find a way to keep the funding on the Nation.

People from the outside were watching us to see if our judicial system is strong, she said.

Generations from now, even beyond our children and grandchildren, the Navajo people of that time will look back and say it was for a good reason, that there was a purpose for this agreement that was reached by our past leaders, she said.

"I want to thank this council for being able to move in that direction to where we are today," Bates said.

He said that although there may be differences between the branches, they will sit down to address the differences to meet the needs of the Navajo people.

"One voice, one nation," Bates said.