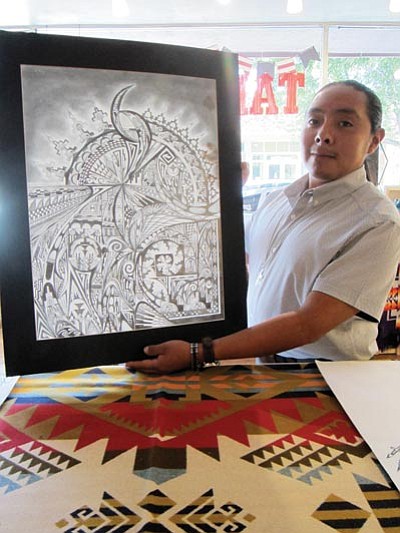 Lomayumtewa Ishii displays some of his artwork at Tam’s Pendleton Art Jewelry in Flagstaff. Katherine Locke/NHO

FLAGSTAFF, Ariz - Hopi artist Lomayumtewa Ishii work is shown in downtown Flagstaff at Tam's Pendleton Art Jewelry, 117 North Beaver St., Suite B in Flagstaff. For the next month his artwork will represent the theme, "Corn is Life."

Ishii is from middle village on First Mesa. He is of the rabbit and tobacco clan.

He took part in the Hopi Festival of Arts and Culture at the Museum of Northern Arizona for the first time this year and was on KUYI for a mini interview. Those experiences gave him more confidence about his work even though he was nervous at first.

"I think I really made a good impression," he said. "People were really asking me about the art and the meaning behind it. We sold some really nice pieces there."

Ishii explains and shows through his work that corn actually is life in the Hopi culture and it is a metaphor for life. Some of his artwork shows corn with a house around it. With rain watering the corn, the corn grows taller and produces more crops.

"During this time, it is the planting season," Ishii said, adding that his field of corn on Hopi is where the inspiration for some of his work came from. "Work in the fields teaches you about how to plant, how to take care of the corn because they say the corn is like your children."

On display also is the type of corn Ishii has grown in his field.

"Some of the corn represent different uses in our culture," he said.

This month, Ishii is displaying work that has corn tied into it. He uses watercolors and sometimes charcoal. His work also represents rain, which is another important thing the Hopi pray for.

"We pray for a long life for the people and the community," Ishii said. "But also for our crops because our crops have been a survival tool ever since my ancestors came to the mesas."

Depending on the intricacies and details included in his painting, it can take Ishii as many as six months to finish a painting, although he works on multiple paintings at one time. He draws out what he wants to paint before using watercolor on his work. For the black parts, he uses acrylic to bring out the lines.

Ishii has been painting ever since he was a child. He said he developed his own style through the years.

"When I first started I mainly painted kachinas," Ishii said. "Simple things like that. I would draw them. I progressed from there."

He would take some of the symbols that are used on Hopi and in its culture and incorporate them into his artwork. Most of his work tells stories. He said that one piece is called "Our children, our fears," which was a painting he was doing when he first got his cornfield.

"I was privileged to get one (a corn field) because my uncle gave it to me in gratitude," Ishii said. "I was doing so much with my family, taking part and helping out when I could. He saw that and he gave me a piece of land to plant."

In Hopi culture, Ishii said, for men, that is a significant thing because they are taking part in a tradition that has been passed down for so many generations.

"We still keep those teachings going like with me and my uncles, they teach me things like that, how the corn is related to life," he said. "You always have to take care of it. You never go to your field mad because the corn can sense how you feel. The corn knows when you are happy and sad, they can feel that energy from you."

He tried to incorporate that feeling into the painting he was working on during his first harvest.

"It helped me to remember those things," Ishii said. "The rain symbols represent the moisture. When I was out there, I was always praying for moisture for my crops. It was really important because all the teachings I learned I tried to put into my art."

Tam Nguyen, who displays Ishii's work in her shop, has devoted a wall of space and two tables as you come through the door for Ishii's work. He is the resident artist at Tam's shop.

"He is a really young, good artist," she said. "So I proposed to him ... every piece that he makes to pass on to the (people) to represent for the young people local here and to teach the young kids to know about the culture. He is the artist in residence here."

He will cycle through different themes every month and he also participates in the Friday Art Walk, depending on other important events in the Hopi year.

More information about Ishii's artwork or Tam's Pendleton Art Jewelry is available at (928) 607-2027.