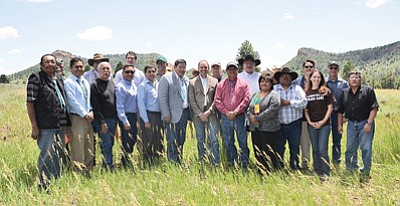 Bates (Nenahnezad, Newcomb, San Juan, Tiis Tsoh Sikaad, Tse'Daa'Kaan, Upper Fruitland) met with officials from the U.S. Department of the Interior, National Park Service, U.S. Department of Agriculture, Bureau of Land Management, and tribes from the Bears Ears Coalition on July 17, urging the designation of the area as a National Conservation Area or National Monument.

The meeting took place outdoors at the Bears Ears area to allow federal officials to gain a firsthand perspective of the land base and to meet hundreds of local tribal members who gathered for the Bears Ears Inter-Tribal Gathering, an event hosted by the Bears Ears Coalition that focused on reconnecting the tribes with their ancestral land and traditional culture.

On March 12, the Navajo Nation Council's Naabik'iyátí' Committee unanimously passed a resolution in support of the federal designation of Bears Ears - ancestral home of many Southwestern Native American tribes.

According to the resolution, the area is the birthplace of Navajo Headman Manuelito. Navajo, Ute, Zuni, Hopi, and other Native American people depend on the land within the region to sustain their traditional livelihoods and cultural practices, such as hunting, gathering and ceremonial purposes. The Bears Ears National Conservation Area/National Monument proposal would also protect archaeological resources.

"Think back hundreds of years and imagine these lands occupied and being used to collect herbs, wood, and other resources that remain important to tribes today," Bates said. "The tribes here today are united and we ask the Obama administration to move this initiative forward."

Council Delegate Walter Phelps (Cameron, Coalmine Canyon, Leupp, Tolani Lake, Tsidi To ii), who sponsored the legislation, previously stated that the initiative to protect the Bears Ears area was initiated by local Utah Navajos, but that the combined collective interest of tribes in the region, including Ute, Hopi, Hualapai, Zuni, and others only makes the proposal more viable.

The process to protect the region was initiated over five years ago by Utah Diné Bikéyah, a legally recognized non-profit organization in Utah created by a group of elders and traditional practitioners who came together over concerns for the aboriginal lands, particularly limitations placed on uses of the land for traditional and ceremonial uses.

Representatives from the Cochiti Pueblo, Hopi Tribe, Zuni Pueblo, and Ute Mountain Ute Nations were among the tribes who participated in the meeting with federal officials, each expressing their strong support of the initiative.

During the meeting, Bates also urged the tribal coalition to remain united throughout the process in order to achieve the ultimate goal of conserving the area.

"We are united in moving this forward, but I also recognize that there will be opposition," Bates said. "In order to get where we want to be, we need to remain unified and understand that it's not going to be easy."

Through the Antiquities Act of 1906, U.S. presidents are empowered to protect natural, historical, and cultural areas by designating them as national monuments - an option that tribes urge the Obama administration to act on before leaving office.